Adonis is the god of desire and beauty in Greek mythology that was sometimes called as the mortal god of beauty. His name is derived from the Semitic word “Adonai” meaning “lord”.

Adonis’ birth is the starting point of the most important myth related to him which involved two important goddesses in Greek mythology; Aphrodite and Persephone. 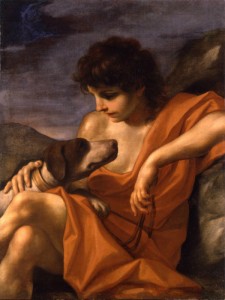 According to the myth, Adonis was a child born out of incest intercourse. Aphrodite forced Myrrha into having an incest intercourse with her father, Theias, Myrrha got pregnant and gave birth to Adonis.  When she saw the newborn baby, Aphrodite was amazed by his beauty and she fell in love with him instantly (It was told in some ancients texts that this might be because she was under the effect of Eros’ arrows).

Since the baby was born out of incest, Aphrodite had to hide him in the underworld. She left baby Adonis to the trusting hands of Persephone. However, Adonis grew up to be the most beautiful young boy Persephone saw and Persephone fell in love with him too. She did not want to give Adonis back to Aphrodite and the two goddesses in conflict brought the issue to Zeus.

Another god who fell in love with Adonis’ beauty is Apollo according to some more recent accounts of Greek mythology. It is narrated in these accounts that Apollo fell in love at first sight with him, who was known to be most handsome young boy in the world, and they became lovers.

The Death of Adonis

As it is the case with his birth, Adonis’ death was also told differently in different accounts. Adonis’ death is narrated in several different versions in  mythology. One version suggests that Adonis was killed by a boar sent by Artemis since she was jealous of his hunting skills whereas some accounts told that Artemis sent the boar to kill him since she wanted to take revenge from Aphrodite because she killed Hippolytus, a minor god who devoted himself to Artemis and who was favored by her.

The third version of the story about Adonis’ death involves Apollo, the god of sun. Some myths told that it was Apollo who killed Adonis since he wanted to take revenge form Aphrodite who blinded Erymanthos, Apollo’s son.

Red flowers of anemone are believed to be flowers which came into existence with Adonis’ blood falling onto the soil during his death.

Adonis’ counterpart in Roman mythology is named the same but he was called and worshipped in North African and Near Eastern mythologies as Tammuz.

Adonis’ symbol is a shooting star and he is mostly depicted in art with his love, Aphrodite.