Hermes is the god of merchants, shepherds, athletics, literature and thieves in Greek mythology. He is Zeus’ son from the mountain nymph named Maia. His counterpart in Roman mythology is Mercury or Mercurius.

Hermes was able to move very swiftly between the divine world of god and the world of immortals and he acted as the messenger of the gods. He was also the protector of travelers and it was his duty to guide the souls of dead to the realm of Hades, the underworld.

Hermes was also a great inventor; he invented the lyre (Apollo’s favorite instrument) from a tortoise the first day he was born. According to myths he also invented the syrinx (a kind of pan pipe), measures, weights, musical scales and the science of astronomy. He is also considered as “the patron of athletes” since he is the inventor of many kinds of sports and races.

Hermes is known to be a helpful god and he helped heroes like Odysseus and Perseus during their adventures according to some myths. During his journey, Odysseus was captured by a nymph named Calypso, daughter of the Titan Atlas. She was trying to convince Odysseus to marry her by saying she would make him immortal if he did so. However, Zeus wanted Odysseus to be free. Hermes delivered Zeus’ message to Calypso and Calypso released Odysseus. 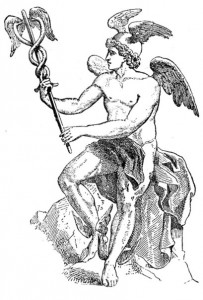 Another instance that Hermes helped Odysseus was about Odysseus’ meeting with Circe, a minor goddess (or a nymph) that had the ability to turn her enemies into enemies. Circe organized a feast for Odysseus and his men and tricked them into eating the food on which she put one of her magical potions.

Being suspicious about Circe’s hospitality, one of Odysseus’ men, Eurylochus, has not eaten the food and was able to warn Odysseus about this. When Odysseus was on his way to rescue his men, who were transformed into pigs by Circe’s magic, he encountered Hermes who was sent by Athena to help Odysseus. To prevent him from being affected by Circe’s magic, Hermes gave Odysseus a holy herb named “moly” , a rare plant which Hermes told only he could dig deep to find thanks to his godly abilities.

When the moment came Circe thought that Odysseus was under the effect of her magic and tried to hit him her wand, an act that would complete Odysseus’ transformation into an animal. Odysseus took out his sword and threatened Circe. Circe released Odysseus’ men and transformed them back into men. As a reward Circe made them taller and more handsome than how they were before.

Hermes also gave Perseus his winged sandals, which allowed him to fly, when Perseus was on his way to slay the Gorgon Medusa. In some accounts it is also told that the weapon used by Perseus to kill Medusa was Hermes’ golden sword. 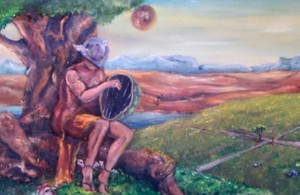 Hermes was also a devious god who used his wit many times to reach his aim. For example, when accused by Apollo about stealing his cattle, Hermes answered Apollo with wise sentences and made him believe that he did not have anything to do with Apollo’s cattle.

Hermes is usually depicted with “the kerykeion”, the messenger’s staff, in his hand while wearing a winged cap or his broad-brimmed hat and winged sandals.