With its presence dating back to 145.5 million years ago, the lotus flower is one of the most commonly used symbols throughout the history. It has been a significant symbol for several religions and cultures, particularly Hinduism and Buddhism.

Rebirth and Enlightenment As Common Symbolism

In general, the lotus flower is mainly considered as  a symbol of rebirth since it rises from darkness and turns into a beautiful flower with pink and white petals much like a human being born from nothing and turning into something complete and beautiful.

This process of coming into existence is also considered as a symbol of spiritual enlightenment and the expansion of one’s soul.

Structure and Symbolism of the Lotus

When you look closely at a lotus flower, you will notice that it is not the same color as the petals. The center is always of either a yellow or yellowish-green hue.

At this center lies a circular mass of stigmas, the capillary receptacle. It represents the ultimate goal of all self-realization:  the union of the human soul with the Ultimate Consciousness.

The petals of a lotus are arranged in concentric layers, and when the lotus blooms, each one opens in succession to reveal the ones inside.

This gradual opening in stages has been used as a metaphor to describe how we attain higher levels of self-realization and consciousness as we progress spiritually.

It was this concept of thought that lends itself to the depiction of the lotus as the seven chakras, or centers of spiritual power of the human body in Indian religions.

The lotus flower blooms from a rather unremarkable bud to a flower that is resplendent in the glory of its multi-symmetrical open form.

That is an analogy for an unenlightened individual on his journey to a realization of the Ultimate Truth.

However, the lotus flower’s journey does not begin in the open air but in the water below. As a bud, it is submerged in water that is not the most pleasant of environments – usually muddy, possibly full of natural or man-made debris, fish and insects.

When the time comes for it to flower, the bud pushes resolutely past the unpleasantness and breaks free of its erstwhile coop. It is only now that the bud spreads itself to welcome the sun onto its face.

Not many people actually make a conscious note of this fact but this chronological mechanism ensures that no part of the petals themselves ever come in contact with the dirty water.

The core of the flower always remains untainted despite the environment in which it began its life.

This is another wonderful analogy for the human soul and our experiences in the mortal world – regardless of how difficult or challenging our lives are, nothing can taint the purity of the human soul. 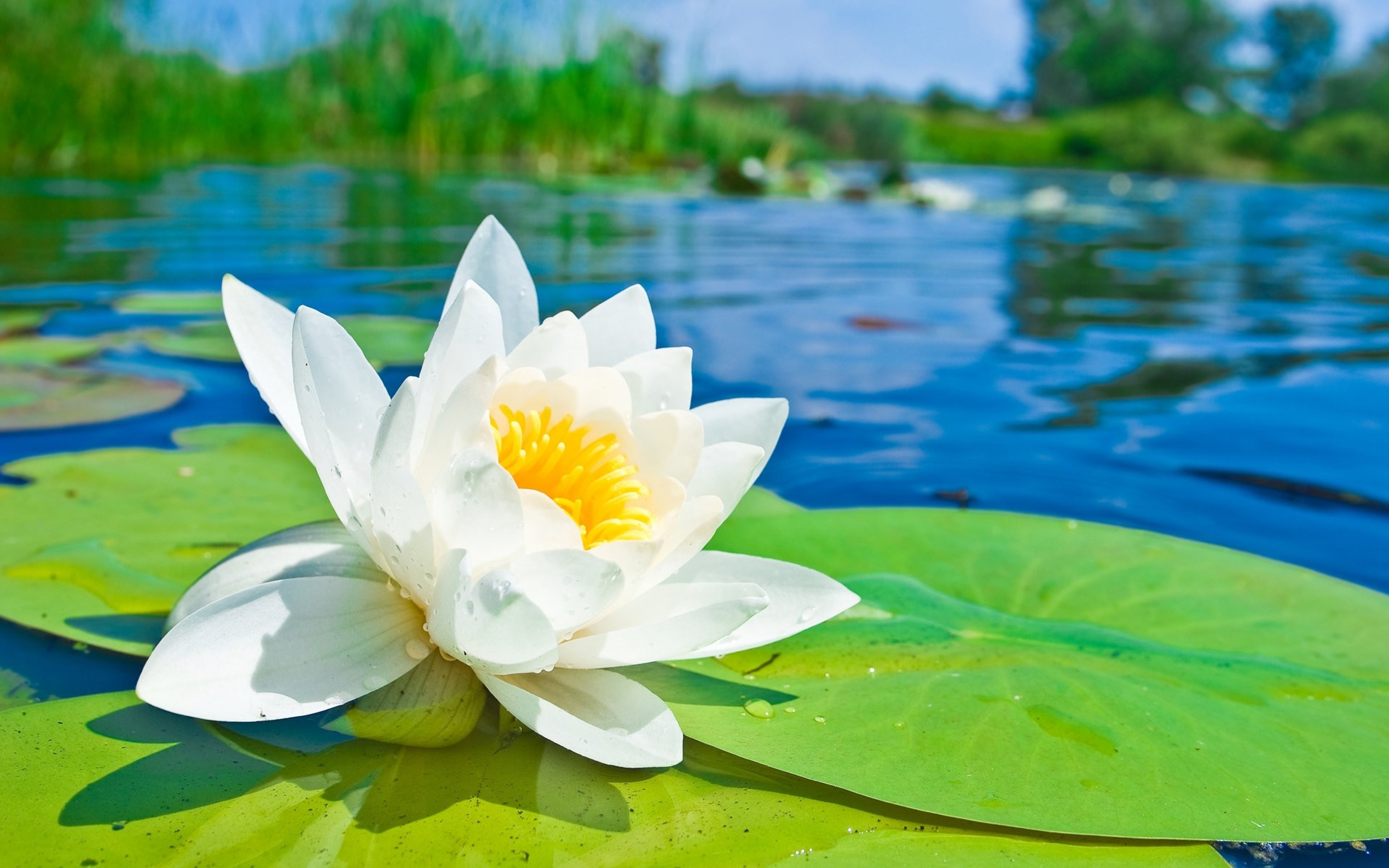 The earliest depiction of the lotus in association with a particular pantheon is not entirely easily determined.  We do know that the ancient Egyptians did not just know of the species but actually cultivated it ponds and marshes.

Images from their mythology depict the god, Horus, sitting on a lotus flower with his mother. The hieroglyphic for the important cardinal number, 1000, was a lotus. Egyptian women wore amulets emblazoned with the lotus during childbirth.

The lotus is really elevated to prominence and significance in the two religions that have their roots in India – Hinduism and Buddhism.

Many of the gods of the Hindu pantheon are depicted as either standing on a lotus flower or holding it in their hands, and sometimes both. The ‘Lotus-Eyed One’ is used to refer to the beauty of the Hindu god, Vishnu.

The ‘Padme’ of the powerful Buddhist mantra, Om Mani Padme Hum, refers to the lotus.  The pink lotus is said to be a natural representation of the Buddha himself.

Scholar of Confucianism, Zhou Dounyi said of the lotus:

I love the lotus because while growing from mud, it is unstained.

The Lotus as Part of Nature

While the lotus has very strong connections to the spiritual world both in the eyes of cultures like Buddhism and Hinduism today, and those of bygone eras like in Egypt, it was also a practical addition to the landscape.

Both in India and in Africa, parts of the lotus like the tubers and the seeds have been used to supplement local diets.

It is a very hardy species, something that one would not immediately suspect, given its delicate appearance. However, a 1,300-year-old lotus seed was found and when scientists attempted to germinate it, it bloomed immediately.

Australian scientists researching the lotus plant discovered that it can regulate its temperature much like warm-blooded animals like us.

Today, it is a common sight in water features and man-made ponds. The lotus is introduced to bodies of water to add a hint of color on an otherwise featureless surface. 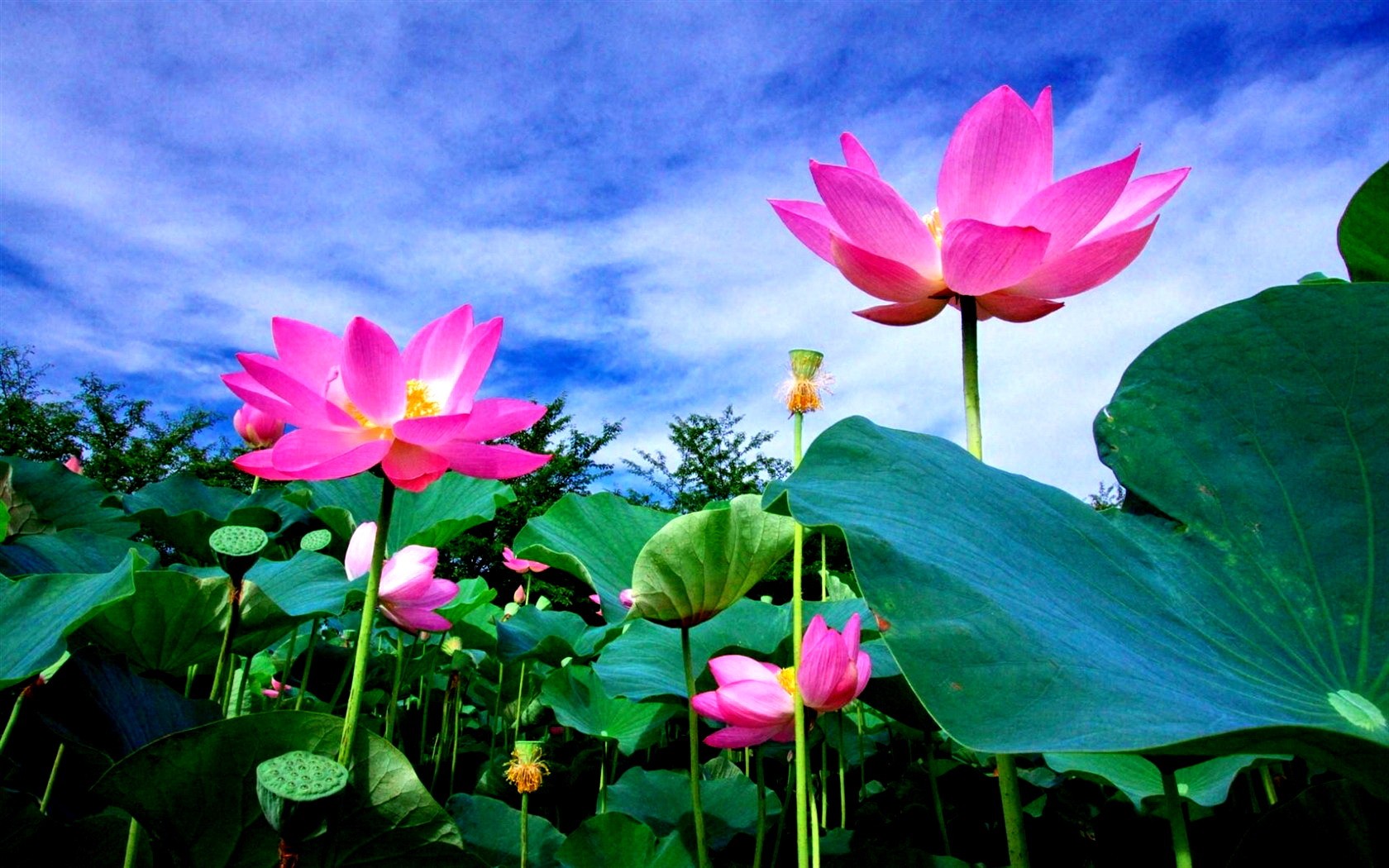 Lotus Flower in Hinduism and The Sacred Lotus Padma

Sometimes named as a “water lily”, the lotus flower is of significant importance to the Hindu religion since the Sacred Lotus Padma is associated with several gods in Hinduism such as Vishnu, Brahma, Kubera, Lakshmi and Saraswati.

Symbolizing purity and divine beauty, one of the prime deities of Hinduism and the Supreme Being of Vaishnavism, Vishnu was mentioned as “Lotus-Eyed One” in the ancient texts of the belief.

Vishnu was depicted holding a lotus flower in his hand in many works of Hindu iconography.

According to Hindu religion, the lotus flower unfolding its petals is a symbol of one reaching a deeper state of mind as his soul expands.

In Hinduism, it is believed that the spirit of the Sacred Lotus Flower (Padma) is a part of each human being’s soul. It is a symbol of fertility, prosperity, beauty, divinity and life.

The rise of the lotus flower from dirty and muddy waters symbolizes achieving spiritual enlightenment and breaking free from basic, instinctive impulses. 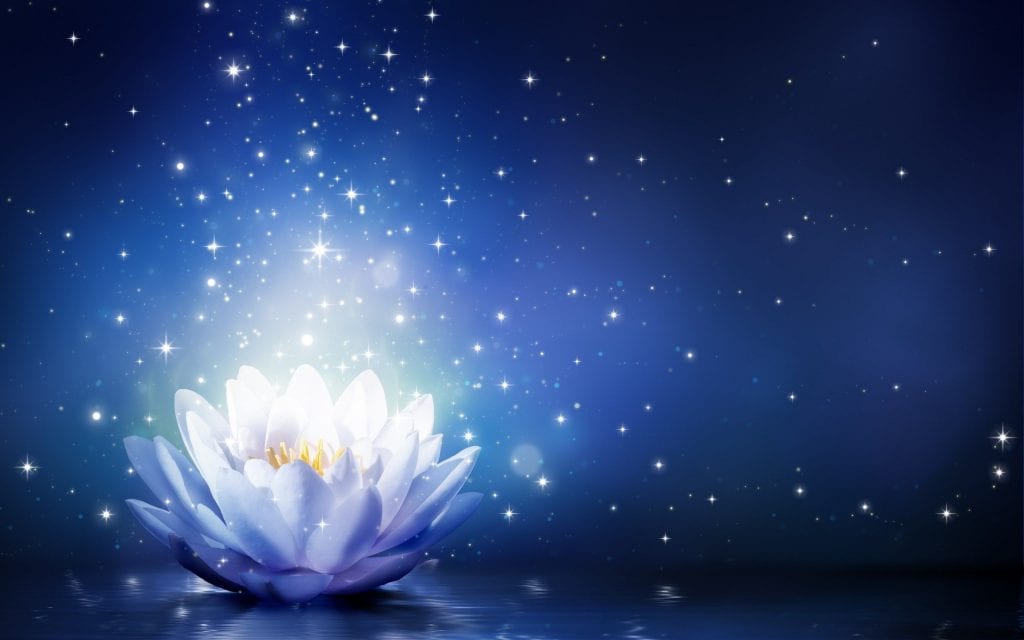 In Buddhism, the lotus flower represents purity since it blossoms on long stalks and moves freely over blurry and muddy waters. It is also a symbol of detachment because the water moves down on its petals easily.

Since the plant grows in muddy water, rises above it and turns into a beautiful flower that reaches light/enlightenment, the lotus flower is a symbol of strength, perseverance, fortune and promise in adverse conditions in Buddhism.

The growth/transformation of the lotus flower is also considered a process of purification. As it grows out of and rises above the muddy waters, the flower (representing the soul) purifies itself in spite of being born in darkness.

Faithfulness is another concept associated with the lotus flower as a symbol since the enlightenment can only be achieved if one works to rise above all adversities and he is faithful enough according to Buddhism.

The mud that one has to rise above represents the suffering that all human beings are born into.

This suffering is a part of the journey of enlightenment since it is a test that will determine whether or not a soul is strong enough to break free from the muddy waters.

Finally, the lotus flower is  considered as a symbol of reincarnation and rebirth in Buddhism.

Reincarnation is central to Buddhist belief. The lotus flower’s transformation while losing its old leaves and adding new ones every day is a symbolic process of reincarnation.

The lotus flower was one of the most important symbols in the ancient Egyptian religion. Called as “seshen”, the flower was a symbol of Upper Egypt and represented creation and rebirth.

It was closely associated with the Sun god, Atum-Ra as it was also a symbol of the sun. Later, the lotus flower was associated with Nefertum, the god of healing, beauty, perfume and fragrance. Nefertum/Nefertem was often depicted in ancient Egyptian art wearing a crown made of lotus flowers.

Much like its use in Buddhism, the lotus flower was considered as a symbol of rebirth and recreation since it closes its petals at night and opens them back again in the morning.

This is also the reason why the lotus flower was associated with the dead entering the underworld to be reborn there. 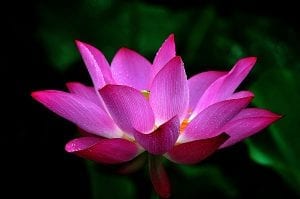 Another use of lotus flower in Egyptian culture is related to the cult of Osiris, funerals, the mummification process and The Four Sons of Horus.

The Four Sons of Horus were born from a lotus flower according to Egyptian mythology and they were depicted sitting on a lotus flower in several ancient Egyptian artworks.  In addition to that, the goddess Isis was believed to be born out of a lotus flower.

In Chinese Buddhism, the lotus flower is considered holy as it is the seat of Buddha.  It represents ultimate purity and perfection since it rises from the mud.

The lotus flower in Chinese culture also symbolizes cleansing of the soul while turning into an outward beauty thus achieving the true nature of reality according to Buddhist belief.