Etymology of Ouroboros, the Infinity Symbol

The term ouroboros is derived from two words in ancient Greek language. The first word is “oura” which means “tail” and the second is “boros” which means “eating”.

Combined, these two words give the meaning “he /it that eats his/its own tail” or “tail eater”.  A serpent eating its own tail has been depicted in different versions of the infinity symbol throughout the history.

There are a few interpretations regarding the meaning of ouroboros symbol. One of them suggests that the serpent in the symbol represents the cycle of life and death that the Universe maintains.

The snake eating its own tail simply represents the recreation of life through death by the Universe. It is interpreted as some kind of a rebirth of the dead reaching an immortality of sorts. Therefore, it is assumed that the infinity symbol was derived from the original symbol of ouroboros.

The Infinity Symbol in Different Cultures

Alchemists of the old ages were using the infinity symbol as a purifying glyph and they referred to it as “the name of the Great World Serpent surrounding the Earth”.

It also represented the element of mercury (which is known as an element that can run through any kind of matter).

Snakes being animals shedding off their old skin periodically in a cyclic manner to renew themselves/their physical existence is the perfect analogy for life being recreated out of death, in other words, for rebirth through death.

Representing “the unity of all” was another reason why the alchemists of the times considered the ouroboros symbol important.

In The Chrysopoeia of Cleopatra, one of the most important works written by alchemists during the earlier ages (the texts comprising the work in question were written in the 2nd century to be exact), ouroboros is depicted in black and white halves, just like the Yin-Yang symbol of eastern culture.

In addition to that, the words meaning “hen to pan” were used beside the symbol of serpent eating its own tail.

“Hen to pan” means “one is all”, “the one is the all”, e.g. unity of opposite sides of one’s being, the duality in one’s nature. Ouroboros the infinity symbol represents two different phenomena such as life and death which cannot exist without one another.

All beings are created/born out of/come from the nature, they exist and live by becoming a part of the nature. At the end, they return to the nature through death and become whole with it again until they are reborn in some different form. 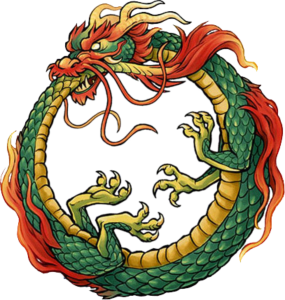 Ouroboros is a symbol which has been used widely in many different cultures throughout the world during the course of history.

In the Middle Eastern culture, Mithra, a divine being (or a God according to some beliefs), which was believed to be reborn, was sometimes depicted with an ouroboros around his waist or encircling his whole body.

This opinion goes in line with the Chinese belief suggesting that the union of the two opposites, light and darkness, produces creative energy.  Just like the symbol of Yin-Yang with the duality of opposite sides existing in harmony, the infinity symbol has also been used as a representation of unity in Chinese culture.

In the artworks of the ancient Hindu culture, the serpent in ouroboros symbol was depicted encircling the tortoise holding on its back the four elephants carrying the world. 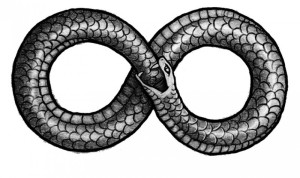 Ouroboros in Europe and Norse Mythology

In Europe, the infinity symbol was used more prominently in Norse mythology compared to other beliefs and cultures.

Jormungandr, the serpent child of Loki and Angrboda, grew into a size that it could eventually encircle earth and reach and devour its own tail.

Also, in one of the tales regarding Norse hero Ragnar Lothbrok, one of Ragnar’s wives, Pora Town-Hart is given a present, a small worm by her father, Herraud the Geatish King.

Growing very large, the worm becomes a snake and bites its tail. Ragnar Lothbrok kills the snake (The snake in question was also believed to be the protector of the Tree of Life in some of the stories).

Later, Ragnar has a son with another woman, Kraka (Aslaug), and their child has a white snake image surrounding the iris of one of his eyes. Just as the serpent slain by Ragnar, the snake in his eye bites its own tail. According to the story, this is why Ragnar named his son “Sigurd the Snake in the Eye”.

When it was used by the Egyptians for the first time in the history around 1600 B.C., ouroboros was considered as the symbol of the sun and it was believed to represent Aten’s travels (Aten is the sun disk in the Egyptian mythology).

Through Egyptians it was passed on to the Phoenician culture and through their relations with Phoenicians it was moved to the culture of Ancient Greek people, who named the infinity symbol in their language as it is used in the present day – ouroboros.