The triquetra occupies a special place in many different cultures and holds a unique significance for each of them. In fact, when we ask, “What does the triquetra represent?”, there is no one answer that is entirely correct or suitably comprehensive.

In short, the triquetra is one of those symbols that ‘means many things to many people’.

It is not alone in that respect. It seems that the older that a symbol is, the more diverse a range of peoples there exists who have adopted it to their own cultures and traditions. One might even say that a widespread prevalence of a particular symbol, like the triquetra, is almost directly linked not just to its popularity but its age. 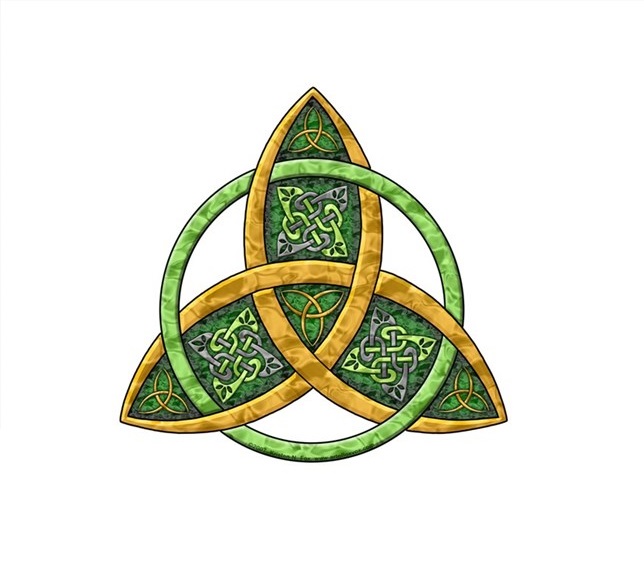 Sometimes, the beliefs of different cultures sharing the same symbol may overlap significantly. In such cases, it is easy to trace the story of that symbol’s journey.

In other instances, the true tale of the evolution of the use a symbol is less obvious and all memory of how it came to be adopted has long faded from our collective knowledge.

The history of the use of the triquetra alternately exhibits each of those two traits.

An Insight into the Elements of the Triquetra, the Trinity Knot

As a basis on which to start our journey into the history of the triquetra, it is best to investigate the name itself. ‘Triquetra’ is a name of Latin origin.

The Latin word ‘Triquetrus’ means ‘three cornered’ or ‘triangular’, and it is clear how this symbol gained that name.

The popular term for it today is the Trinity Knot and the Irish Love Knot.

Of course, this is the name by which we have come to know it but it does not point to its origins. It is because the triquetra, despite being of pagan origin, was embraced by the Church at a time when all their writings and rituals were conducted in Latin that we have ended up with this name.

While the shape obviously lent itself to its name, there is a deeper meaning behind the three-sided shape that many people miss. Each of the three leaf-like shapes that form the symbol are not arbitrarily drawn, they are a mathematical shape called vesicae piscis.

A vesicae piscis is the shaped defined by the overlap of two circles of equal size when each is positioned so that its center is on the other’s circumference. In ancient times, it was a symbol of the feminine because it looked like the aperture of birth.

In essence the shape is a stylistic rendition of a fish. The Church adopted the name vesicae piscis, which translates as ‘bladder of the fish’ because Christ is described as a ‘fisher of men’.

A trifold repetition of the vesicae piscis referred to three births, which is an idea that predates Christ and we will investigate that a little later.

The beauty of the triquetra is that what appears to be a rather complicated shape is actually comprised of just three lines. It incorporates three vesicae piscis by the use of three arcs, each merging into one end of its two neighbors to complete a unicursal, a line without end.

Sometimes, the triquetra is also depicted with a circle interlocking the triangular shape. That is also another aspect that receives special attention later in this piece.

The very earliest representations of the triquetra are actually Indian and date back five thousand years.

There is little doubt among scholars that several religious practices as well as portions of language and alphabet shared between the people of Europe and India are evidence of a shared origin that branched off many thousands of years ago. 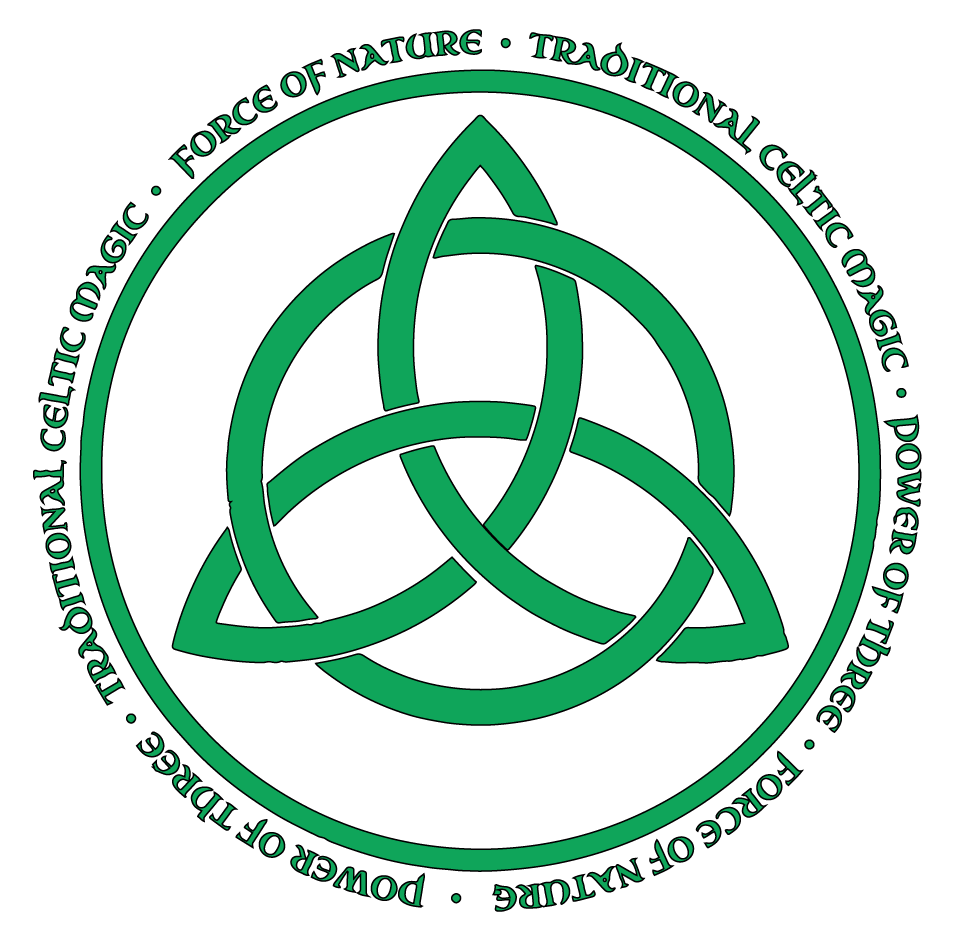 It may be that the early Indo-Europeans, commonly called the Aryans, are the link between ancient India and the triquetra we know to be an old European symbol today.

The triquetra is most commonly known today as a symbol with its origins in Celtic tradition, with evidence that shows that the Norse Viking people also used it at about the same time in the 7th and 8th century A.D.

The triple aspect of the triquetra made it a very versatile symbol. Many cultures put their own interpretation on its meaning(s) and we see a recurrence of the number ‘3’ and its association with the triquetra everywhere it was used.

For the pagans who revered nature and saw the hands of their gods in all things, the Three could be God, Goddess and Man; it could represent the three realms, Heaven, Hell and Earth; others could have seen it as the world around us in sky, land and sea; or, as is popular in Wiccan circles today, they could have interpreted the triquetra as the three aspects of the female: Mother, Maiden and Crone.

The last of those is very telling because of the fact that the vesicae piscis of the shape alluded to the female reproductive opening.

That shape was their connection to the miracle of Life, both during the act of creating life upon union of man and woman, and the welcoming of life into the world upon birth.

The triple nature of the feminine Divine is a popular theme in ancient pagan lore. The tripartite representation is probably most famous as the Triple Goddess. This symbol shows a full moon in the center with a waxing moon on one side and a waning moon on the other.

The moon itself was a strong reference to the female because their menstrual cycles could be timed by it. The mensuration process was also linked the process of bringing life onto this earth, completing the circle.

Triquetras dating to the pagan age of the Celts has been found inscribed on rocks. 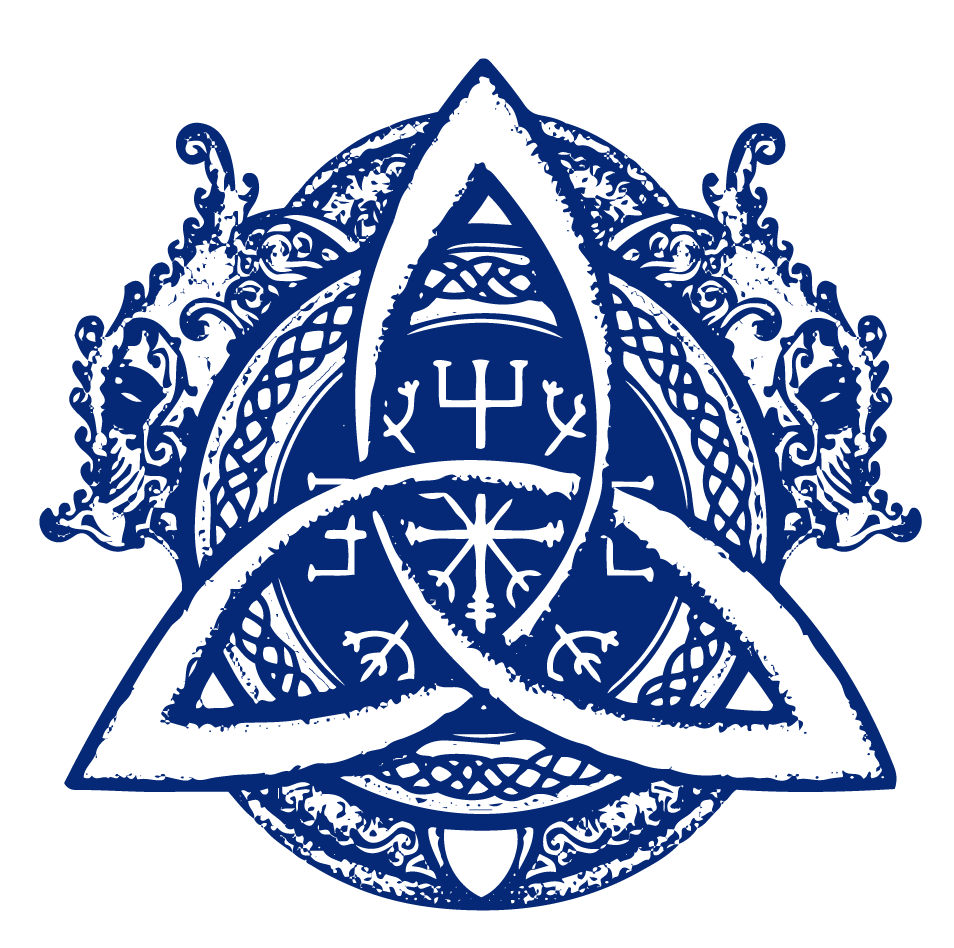 However, when we talk about the relationship between the Celts and the triquetra today, the most common examples do almost entirely away with the pagan traditions and talk of the Book of Kells instead.

Most do not realize that the Book of Kells, which is an ‘illuminated manuscript’ (decorated with gold, silver and/or colorful dyes) from the Christian Celtic era.

It consists of Latin versions of the four gospels of the New Testament and has been dated to 800 A.D. (In a pleasant coincidence, the book is kept today in Dublin at Trinity College).

In a time when Christianity was expanding into the northernmost parts of Europe, it was constantly encountering the erstwhile popular pagan religions that had flourished there.

The adoption of the familiar triquetra symbol that the pagans used was the ideal way for the new religion to establish a foothold without being too disruptive and thus to deflect undue criticism and hostility.

In the Celtic Christian world, the tri-symmetrical shape was quickly interpreted as alluding to the Holy Trinity of the Father, the Son and the Holy Spirit.

It can also be said that the triquetra evolved from being a symbol that hinted at the female (mother, maiden, crone) to one that would be interpreted as male (‘Father’ and ‘Son’).

However, despite the prominence that the Trinity holds in the Church, we see that the early Christian Celts did not often depict the triquetra on its own in the early days of its use in their culture.

The Book of Kells, one of the most magnificently-decorated works of the Insular Art (Island Art) period features the triquetra but never as the subject of discussion or of an illustration; it is always used in the margins and other spaces as a ‘filler’.

In light of this evidence, it seems that although the triquetra was adopted by the Celtic Church, it was drastically reduced in importance.

The Triquetra and Other European Tribes

Besides the Celts, evidence of the use of the triquetra in the Germanic tribes of Northern Europe indicates that the symbol was not limited either geographically or strictly by tribal beliefs. It appears on their rune stones and has been found on their coins.

Interestingly, the Germanic people are one of the peoples most closely associated with the Indo-European race, the Aryans.

The oldest evidence of triquetras completes the circle back to India. From this, it seems very likely that although no trace of the symbol has been located in the Asian region between India and Europe, tribes who had used it in these two faraway regions had either interacted or interbred somewhere along the line.

The Triquetra in Asian Tradition

On the other hand, the triquetra does seem to have journeyed north-eastwards by some means. In Japan, the design of a tomoe, interpreted as a ‘wishing’ or a ‘hoping’, that was used on family crests comes very close to resembling a triquetra in form.

While the use of familial crests is virtually dead today, except in select aristocratic circles, the design often finds its way into corporate logos. The most common representation are triple whorls known as mitsudomoe.

Most people would assume that this was very exotic and specialized and that they would never have come across a Japanese version of the triquetra before. In reality, the odds are that you have probably seen it hundreds of times but simply not allowed yourself to recognize it as such. 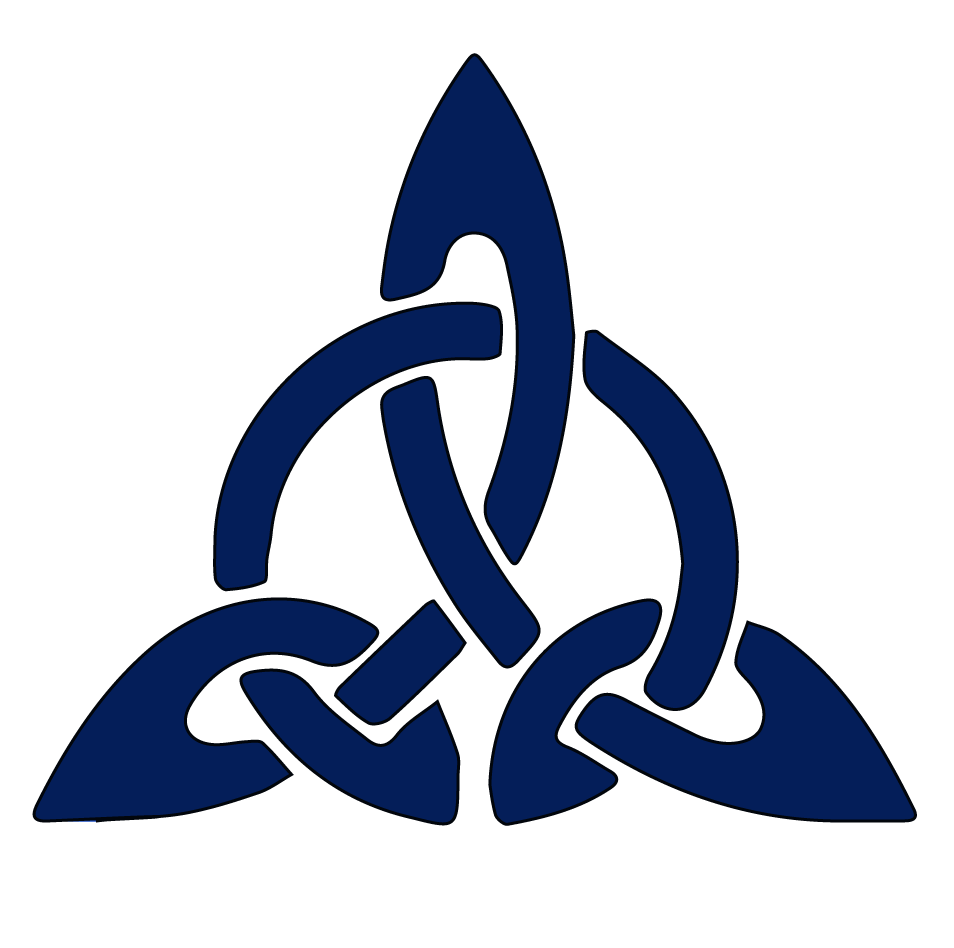 I speak of the logo of the major Japanese automobile manufacturer, Mitsubishi.

That’s correct, the outline of the three-pointed star on Mitsubishi-manufactured vehicles and home appliances can be traced in a single line without end. The symbol has indeed brought great fortune to the company – its revenues account for over 1.4% of Japan’s total GDP.

The Hidari Gomon, or ‘Leftwise Honoring Pattern’ is found in all shrines of the Shinto religion native to Japan. It was first used by the Ryuku Kingdom that ruled the Ryuku Islands between the 15th and 19th centuries.

In Korea, the use of Taegeuk, which use interlocking curved shapes to form a multi-colored whole is most easily recognized around the world in the Yin-Yang symbol.

However, that symbol’s dual nature can be further expanded so it incorporates three interlocking curved-edge shapes. This design is sometimes found on ceremonial drums. 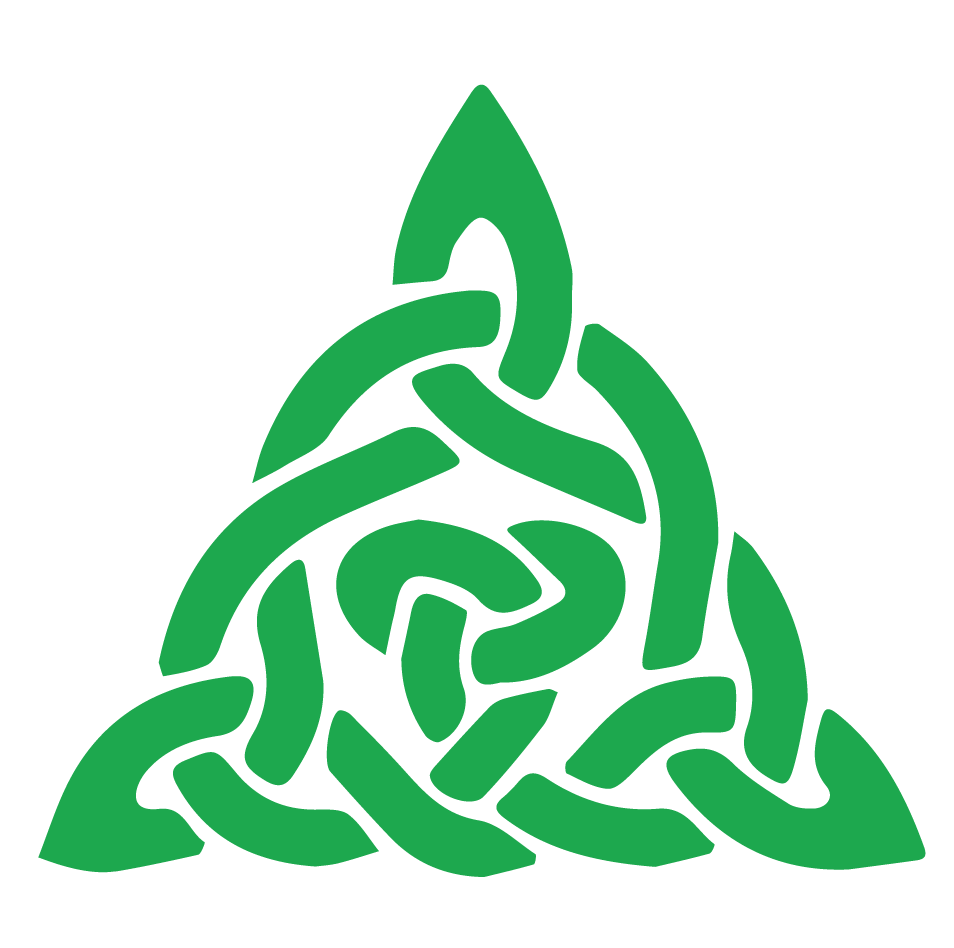 Variations of the Triquetra

The triquetra symbol on its own as three intersecting vesicae piscis is the most basic version that we find, and perhaps the closest to the original that we have so many thousands of years after it was imagined.

A popular version of the triquetra that we find today is one that incorporates a circle into the design.

The circle on its own is a powerful shape. Without any edges and without a beginning or an end, it has long been used as a symbol of magic and even plays a part in many religious rituals in cultures around the world.

In Wicca, a practitioner has to ‘Cast the Circle’ before he or she can begin an invocation. The circle here represents both a region of safety inside of which the person is protected from outside forces (and also from spirits that are invoked) and as an enclosed space that holds the spells cast and enhances their power.

It is a common belief that the circle can be used to represent eternity because it has no start and no end.  That is why we often hear the phrases ‘the circle of life’ and ‘the cycle of life and rebirth’.

A popular interpretation today is that the act of combining the triquetra, which itself is unicursal and, therefore, a symbol of eternity, with the circle enhances the power of each of both the elements. 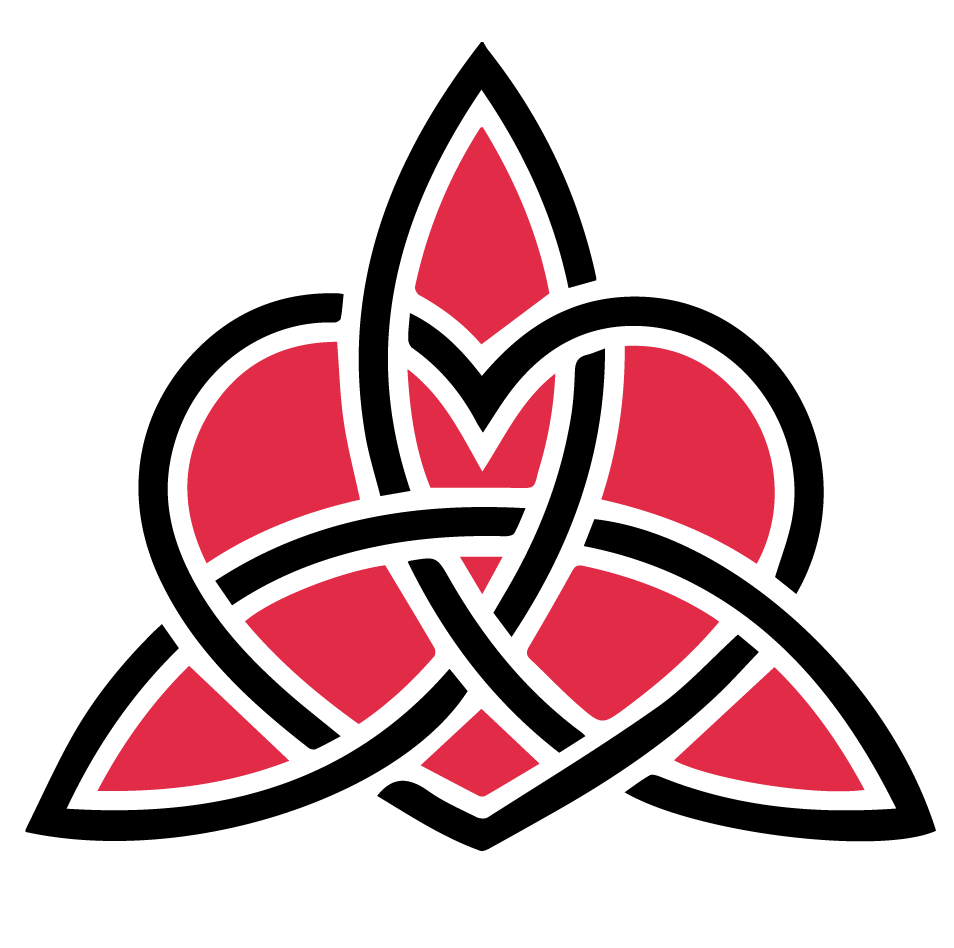 The triquetra with the interlaced circle has become a popular symbol of love. It is often seen on engagement and wedding rings and associated decorations and paraphernalia. The circle interwoven with the triquetra is symbolic of eternal love.

In this capacity, it is sometimes called the ‘Irish Love Knot’.