Arachne is a figure in Greek mythology known for her challenge against the goddess Athena.

According to the myth, she was the first spider of the world who was originally a young daughter of a shepherd known for his beautiful wools. Arachne was very talented in weaving and studied with Athena, the goddess that is known to teach her people about handcrafts when she has time.

One day one of the nymphs asked Arachne if it was Athena who gave her the gift of weaving but Arachne was too proud and states that she did not need guidance about weaving from anyone including Athena. She then challenged the goddess to compete with her in weaving. However, this was not the exact moment Arachne’s hubris sealed her fate. Athena, one of the most rational goddesses among the old Greek gods, came to Arachne’s door in disguise showing herself as an old woman. Athena warned the young mortal to be wise and to not to offend gods and told her all human work had to be improved, since all of those work were imperfect and could not match gods’ works. In spite of all the warnings, Arachne insulted the old woman and told her she did not need her or Athena’s advice on anything.  Athena revealed herself and accepted the challenge. She made the goddess Envy the judge to give Arachne a fair chance.

While Athena depicted Acropolis in her work depicting mortals acting ignorant and foolish (with one part of the work being about young women turning into animals because of their disrespect and foolishness) Arachne weaved her work in a way that is very insulting for gods. She pictured Zeus cheating on his wife, Dionysius as a drunk and Apollo as a poor shepherd. Both works were so beautiful that Envy couldn’t decide which one was better. According to some accounts, even Athena admitted that Arachne’s work was perfect. 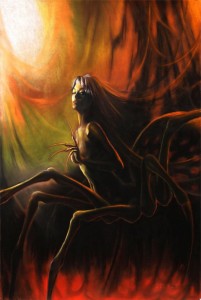 Athena was angry with Arachne’s insulting work and she hit her. (In some versions of the myth she touches Arachne’s head to make her feel guilt and shame and that is why Arachne kills herself while some versions tell that Athena’s magic to alter Arachne’s mind did work only partially and while Athena meant to make her learn about respecting and fearing gods as well as making her feel guilty.  Her magic only did the latter resulting in Arachne’s suicide). After that Arachne became very upset and hanged herself. Athena was sad that things have come so far to cause Arachne’s death. That is why she decided to let her live but not in human form. Athena cast a spell on Arachne’s body and turned her into a spider.

In another version of the myth, events happen all the same and Athena accepts Arachne’s challenge. Although Arachne weaves extremely beautiful, her work is not close to Athena’s and so the goddess wins the competition. However, after seeing how incredibly passionate Arachne is about weaving Athena turns her into a spider and says she and her descendants will be hanging and weaving throughout their lives.