Athena was the goddess of wisdom, justice, war, skills, art and industry in Greek mythology and  the daughter of Zeus and Methis.

According to the myth, Athena was born from inside her father’s head after Zeus swallowed her mother, Methis. Zeus was told that Methis would give birth to children who would be more powerful than him. So, after having intercourse with her, Zeus swallowed Methis but he was too late since Methis was already pregnant. After a while, Zeus had very strong headaches the reason of which was told to be Methis hammering a helmet (and preparing a robe) for her daughter inside his belly.  Hephaestus came to his father’s aid (although different sources cite different entities like Prometheus, Palaemon, Ares or Hermes to be the one helping Zeus) and cracked Zeus’ head open with an axe. Athena came out of his head dressed in the robe and wearing the helmet Methis prepared for her.

The Judgment of Paris, Helen of Troy and the Trojan War

Achilles’ mother and father, Thetis and Peleus invited all the gods to their wedding except Eris, the goddess of strife and discord. Being mad with them because of this, Eris made a plan to ruin the wedding. She wrote “to the fairest (to the most beautiful)” on a golden apple, went to the wedding venue and threw the apple at the goddesses. Hera, Athena and Aphrodite all claimed to be the fairest goddess entitled to have the golden apple.

Three goddesses brought the matter to Zeus for a decision but Zeus did not want to look like he favored any one of them. He wanted Paris, a Trojan prince, to make the decision. Each goddess met Paris and took off her clothes to show him that she was the most beautiful one. Paris could not make a decision since all three goddesses were very beautiful. Trying to win him over, each goddess offered a bribe to Paris. While Hera promised to award him with the reign of Europe and Asia, Athena told him that she would give him fame, wisdom and glory in battle. However, it was Aphrodite who convinced him by saying she would ensure that the most beautiful woman on Earth would be his wife.

The woman Paris was supposed to marry was Helen of Troy and she was already married to Menelaus, the King of Sparta. Aphrodite made Helen fall in love with Paris and Paris took her to Troy. Helen’s abduction was considered a huge insult by the Spartans and it was the main reason behind the Trojan War. 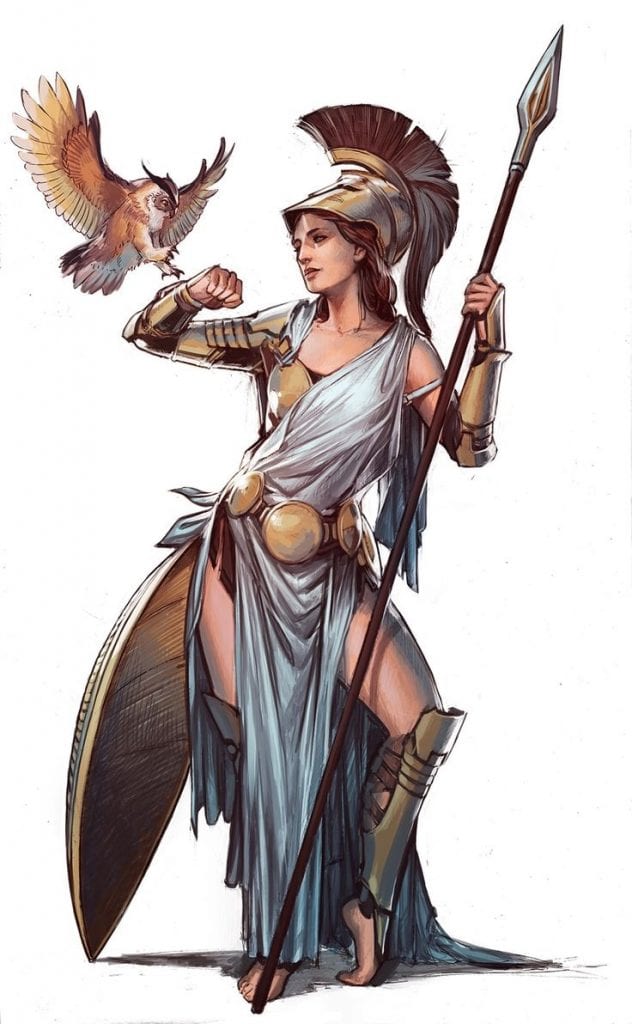 “Parthenos” is the epithet given to Athena since she was a virgin and never had any lovers according to the myths. The literal translation for the name “Athena Parthenos” is “Virgin Athena”. Parthenon Temple in Athens, Greece was built for and dedicated to the Greek goddess of wisdom and war.

It was told in some myths that Hephaestus liked and wanted to marry Athena but she refused to marry him since she found him ugly. Hephaestus tried to force Athena into having intercourse with him but Athena managed to escape. Hephaestus’ semen fell on to the surface of the Earth causing Ericthonius to be born from Gaia, the personification of the Earth. Athena looked after Ericthonius as his foster mother.