Andromeda was the daughter of Cassiopeia and Cepheus, rulers of Ethiopia as the queen and the king.  Andromeda was also the wife of one of the greatest heroes in Greek mythology, Perseus. The word “andromeda” means “ruler of men” in Greek language.

The most famous myth related to Andromeda in Greek mythology is about her being rescued by from a great sea monster by Perseus. Her mother Cassiopeia boasted about herself saying that she was actually more beautiful than Nereids, Poseidon’s sea nymphs making Poseidon furious. The god of sea sent a sea monster to lay waste on the coast where Cepheus and Cassiopeia lived. Andromeda’s father, King Cepheus was told by an oracle that his only way to be saved from the great sea monster was to sacrifice his virgin daughter to it. Cepheus chained his daughter on a rock for the sea monster to get her but Perseus see the princess before the monster got to her. Perseus convinced Cepheus and Cassiopeia that he could slay the sea monster but asked them to let him marry their daughter if he was able to do save her. Perseus slew the monster and brought the princess back home safely.

While Perseus and Andromeda’s wedding preparations were being done Phineus, the man to whom Andromeda was promised before she was taken as a sacrifice to the sea monster, showed up and claimed that he deserved to marry Andromeda. Perseus tried to convince Phineus that his right on Andromeda was no longer valid since she surrendered herself to death during the sacrifice but Phineus was not convinced at all. Finally, Perseus took out Medusa’s head and Phineus and some other people who looked at her eyes turned into stone.

Perseus and Andromeda had six sons named Mestor, Sthenelus, Alcaeus, Heleus, Perses and Electryon and a daughter named Gorgophone. Perses is believed to be the ancestor of Persians from whom they derived their names. Perseus and Andromeda returned to island of Seriphos where Perseus found out that King Polydectes is still after his mother and turned him into stone also by using Medusa’s head. 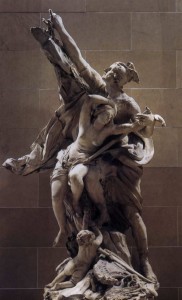 Finally, the family left the island of Seriphos and made their way into Argos where Perseus’ grandfather King Akrisios lived. They kept their settlement to the island as a secret since it would bring harm onto them if the king learned about it.

One day Perseus participated in a sport competition and he was throwing discus. The discus accidentally hit his grandfather with it and killed him and fulfilled the prophecy about King Akrisios being killed by his grandson one day.