Poseidon is the god of the sea, rivers, earthquakes, flood, drought and horses in Greek mythology. He was one of the six children of the Titans, Cronus and Rhea. His counterpart in Roman mythology is Neptune.

Amphitrite, one of the old sea goddesses, daughter of Nereus and Doris and the granddaughter of Titan Oceanus, was the wife of Poseidon. Poseidon had many children but Theseus, the founder and the king of Athens, was the most important name among these children.

Poseidon, the God of Horses

According to a myth, Poseidon wanted to marry Demeter but she was unwilling  to get married  and made it difficult for him by telling  she would be his bride  if he created the most beautiful animal in the world. So, he created horses, however, it is told that he had to try real hard for this and he created many other animals before creating horses. After spending such a long time for creating horses, he lost interest and did not want to marry Demeter anymore.

Seamen mostly worshipped Poseidon in the ancient times and it was a part of the rituals that seamen had to drown horses as sacrifices for him.

Poseidon and the Walls of Troy

Zeus took away divine powers of Poseidon and Apollo temporarily since they took part of a rebellion planned by Hera and they were punished by Zeus to serve the King of Troy, Laomedon. King Laomedon made them build very high walls surrounding the city and promised that he would pay them well for that.

However, he did not keep his promise and this ended up Poseidon sending a great sea monster to lay waste on the City of Troy before the Trojan War started. 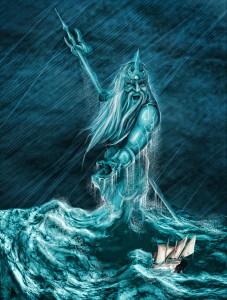 The god of the sea was almost all the time depicted with a trident in his hand. He was known to be a moody god and it was told that he used that trident to shatter the earth, cause earthquakes and storms when he became angry.

It was told in some myths that Poseidon sometimes shapeshifted into a horse. Pegasus, the flying horse born from Medusa when Perseus killed her, was known as one of Poseidon’s offspring, so it is considered that Poseidon had the shape of a horse when he had an intercourse with Medusa.

Poseidon was also known to give the ability of transformation to other people as he did with maiden Caenis, whom he turned into a very strong man named Caeneus upon her own request.