Aphrodite is the goddess of beauty, love, pleasure and procreation in Greek mythology. According to the famous poet Hesiod, Aphrodite was born from the sea foam (“aphro” in Greek) when Cronus castrated his father Uranus (the god known as the father of gods) and threw his genitals into the sea. However, Homer told that Aphrodite was the daughter of Dione and Zeus.

Cythera and Cyprus are other names given to Aphrodite. These are the names of regions which were claimed to be the birthplace of Aphrodite.

One of the most important myths regarding Aphrodite is the one according to which she was captured while having intercourse with Ares, the god of war, in a chain net by her suspicious husband, Hephaestus. The lovers were shown to other gods as a humiliation and they were released finally after Hephaestus was convinced that Ares would pay for what he did.

Aphrodite in Tale of Eros and Psyche (Cupid and Psyche)

Tale of Eros and Psyche is another famous myth related to Aphrodite. According to the story, she was jealous of the beauty of Psyche, a mortal woman, and she sent her son, Eros (Cupid), to shoot Psyche with his arrows to cause her fall in love with the ugliest man in the world. Eros was keen on fulfilling his mother’s request; however, he pricked himself accidentally and fell in love with Psyche himself. Psyche was notmarried at the time and being worried about their daughter’s future, Psyche’s parent went to consult an oracle.

Eros made the oracle tell her parents that their daughter’s future was bound to be spent with a creature living on top of a particular mountain and even gods were afraid of this creature in question. 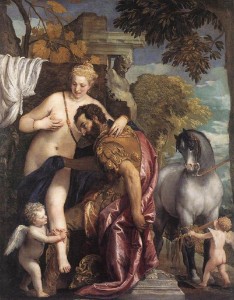 Psyche climbed to the top of the mountain and started living in a cave on top of it, leaving everything in her old life behind. Eros visited her every night and they made love to each other without Psyche not knowing who Eros was. Eros wanted Psyche to never try to light a lamp and see who he was since he did not want that to happen.

Psyche had two sisters who were very jealous of her and her sisters convinced Psyche that her husband was, indeed, a monster and she had to stab him with a dagger. One night, Psyche lit a lamp with a dagger in her hand but recognized Eros was actually her husband. She dropped the dagger and a drop of oil from the lamp fell onto Eros’ shoulder waking him up. Eros ran away from her saying “Love cannot live where there is no trust!”

Psyche desperately looked for her lover wandering around Greece and ended up encountering Demeter, who told her the only way to find Eros was to have his mother’s Aphrodite’s blessing.

Psyche was assigned to travel to the underworld and bring some part of Persephone’s beauty to Aphrodite, who claimed to have lost some of her beauty because of her care for her son, Eros, when he was grieving for Psyche.

After leaving the underworld Psyche thought that Eros would return to her and love her again if she took some part of Persephone’s beauty form inside the box she was carrying to Aphrodite. However, she was taken by “Stygian sleep” contained in the box when she opened it. Eros flew to help her and made woke her up. He begged Aphrodite and Zeus to let him marry Psyche. They granted his wish and also made Psyche an immortal.