Apollo is the god of music, poetry, healing, diseases and plague, oracles, prophecy and archery in Greek mythology. His name in Roman mythology is the same but he has been called with some other names as Apollon, Phoebus and Phoebus Apollo. He is one of Zeus’ sons and his mother is Leto, who also gave birth to Apollo’s twin sister, Artemis, according to Olympian accounts.

Apollo was identified with the sun god  Helios in some myths and he is described as the god of the sun and light in some Greco-roman epithets. That is how “the god of the sun” became one of Apollo’s names throughout the history. 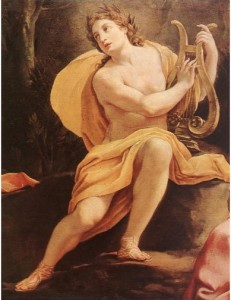 Apollo was born out of marriage from the affair between Leto and Zeus. As she always was furious about Zeus’ affairs, Hera became jealous of Leto when she heard Leto was pregnant and she banished Leto and told her to find another place to give birth to her child. However, Hera conditioned Leto that this place cannot be anywhere on earth whether it is a piece of earth or an island in the sea.

Homer told in his stories that Apollo was one of the most feared and respected gods in Greek mythology. Apollo was known to apply religious law; he let mortals know about their sins, judged them and tried to purge off their sins. He was a strict god who kept his distance with both other gods and mortals. Only way to communicate with him was through oracles, prophets and his father, Zeus.

One of the most important myths regarding Apollo in Greek mythology is about his killing the serpent named Python. Python was a giant dragon that defended the oracle in Pytho. Python was destroying the villages in the area, laying waste on crops and poisoning springs. Apollo killed him by using his arrows. In some accounts it is told that since Gaia was the mother of Python, Apollo served to King Admetus as a cattle herder for nine years to pay for what he did. 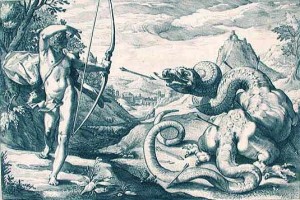 Apollo returned to Pytho, got on a ship in disguise as a dolphin and took command of the ship’s crew ending in establishing his oracle there. That is why Pytho was named as Delphi (derived from the word “dolphin”) thereafter.  In some accounts it is told that Apollo killed Python since the giant dragon chased Leto relentlessly when she was pregnant with her twins.

Apollo was also known to have helped Trojans by bringing plague to Greeks during Trojan War and to have helped Paris by guiding him while he took the shot that hit Achilles on the heel and killed him. In some accounts, it is told that Apollo was the one who shot and killed Achilles.

As the god of music Apollo is usually depicted in paintings with a lyre, the instrument which he was known to play skillfully, in his hands.