Artemis was the goddess of virginity, the moon, the wilderness, hunting and wild animals in Greek mythology. She was the daughter of Zeus and Leto and she was also Apollo’s twin sister.

Artemis was a virgin goddess and she was considered as the protector of young girls until they get married. It was also believed that Artemis looked over every child’s birth and prevented childbirth from giving more pain to the mother and sometimes putting  out of misery the mother, who  is about to die because of childbirth, by giving her a quick death.  It is even told in some myths that right after being born Artemis helped her mother, Leto, to give birth to her twin brother, Apollo.

Artemis is also known as the huntsman of the gods and her hunting adventures are the most popular topic for themyths related to her. Callisto and Orion, who was the only character in mythology Artemis fell in love with, accompanied Artemis during her adventures in the wilderness. 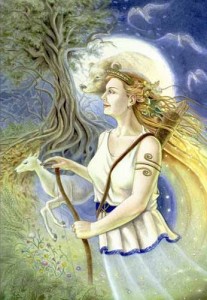 The Aloadae, Otos and Ephialtes, were Poseidon’s twin sons from his affair with Iphidemia. As giants they grew up too fast in a very short time and one day they decided to rebel against the gods of Mount Olympus. They went to the top of Mount Olympus and wanted to make Hera and Artemis their wives. Artemis was the only goddess who was not scared of these furious giants and she managed to trick them into killing each other. She turned herself into a deer and jumped right between them. She made a move when they shot their spears ending in killing each other instead of the deer in the middle.

Artemis and the Trojan War

Supporting her brother, Apollo the patron god of Troy, Artemis fought beside the Trojans during the Trojan War. It is told that she even went into a fight with Hera who supported Greeks during the war and Hera beat Artemis.

Artemis tried to help Trojans by calming the sea down and stopping Greeks’ voyage to Troy. An oracle came and told the Greeks that the only way to convince Artemis into letting them continue their journey was sacrificing Iphigenia, daughter of Agamemnon for her. Agamemnon made a promise to Artemis in the past saying that he would sacrifice the thing he loved the most but he failed to keep his promise.  However, in the end, Artemis did not let Iphigenia die because of her bravery. According to some myths, she turned Iphigenia into Hecate, a goddess of the underworld, sorcery, magic, witchcraft and poisons.

Artemis’ counterpart in Roman mythology is Diana and she is usually depicted with a quiver and bow although some rare depictions display her with a spear in her hand.