Demeter is the goddess of agriculture, fertility and grain in Greek mythology. She is the daughter of the Titans, Cronus and Rhea, and she is the mother of Persephone, the queen of the underworld.  Her name in Roman mythology is Ceres and the word “cereal” is actually derived from her name.

Myths about Demeter usually depict her together with her daughter Persephone. Indeed, the most important myth related to Demeter is about her daughter’s abduction by Hades. Demeter was one of Zeus’ earliest affairs even before his marriage to Hera and Persephone was his daughter from Demeter. It is told in the myth that Zeus promised Persephone as a bride for Hades.  However, he knew that Demeter would oppose this and he kept this secret from her. Hades abducted Persephone to the underworld and that made Demeter furious.

Demeter brought a draught on earth and humans started to starve. Feeling betrayed by Zeus and Hades, Demeter said that she would not resume  to her divine duty of bringing fertility to earth until her daughter is taken from the Underworld and given back to her. Zeus and some of the other Gods forced Hades to return Persephoneto the land of the living. However, Persephone had eaten some pomegranate seeds while she was in the underworld and according to the rule of Fates, any being that has eaten a food of the underworld could never leave that realm.

As the myth regarding the abduction/rape of Persephone suggested Demeter was a motherly figure in Greek mythology and she was also considered as “the Mother of Earth” since she was the goddess nurturing the soil and bringing fertility to it. 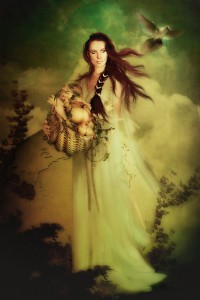 Demeter had Zeus, Poseidon, Iasion, Karmanor and Mekon as her consorts. Demeter had Persephone from her intercourse with Zeus. She gave birth to Areion (Hermes’ immortal horse) and Despoine from her affair with Poseidon. Iasion was the Prince of Samathrake Island in Greece and was killed by Zeus, who was jealous of him. Demeter had two sons from Iasion named Philomelos and Ploutos. Karmanor was a lord in Crete and Demeter had two children from him; a daughter named Khrysothemis and a son named Eubouleos. Mekon was a man Demeter fell in love myth and she had no children from him.

The Symbols of Demeter

Sheaves of wheat, winged serpents, acorns, torches, honey and bread are the symbols of Demeter in Greek mythology and she is usually depicted in the paintings holding a sheaf of wheat in her hands.