Persephone was the wife of Hades and the goddess of the underworld, the realm of the dead. The word “Persephone” was considered by some linguists to have the meaning “she who kills the light”.  Her counterpart in Roman mythology was Proserpine.

Persephone was abducted by Hades to the underworld making her mother, Demeter, the goddess of harvest, furious against Hades and Zeus. Demeter forced them to return her daughter to the land of the living but only for some time of the year, since she had eaten the fruit of Hades, namely pomegranate seeds, and had to go back to spend some part of the year with Hades. This is the reason why she was considered as symbolization of vegetation on earth and she was known as the goddess of the spring growth. When spring came it was considered that Persephone returned from the underworld and spread fertility all around the world and she was considered to have gone back to the underworld during winter time when the soil became unfertile and all the plants died.

Persephone and her mother Demeter were generally worshipped in the Eleusinian Mysteries, which were the initiation ceremonies that an agricultural cult held for Demeter and Persephone’s every year. The origin of this cult is told to be dating back to the time before the age of Olympian gods. Persephone’s name among the members of this cult was Kore, meaning “the maiden”. 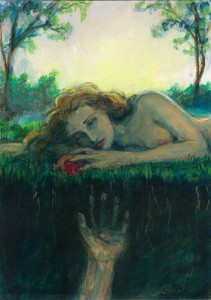 Persephone was the symbolization of joyful and innocent youth regarding the time she spent before getting married to Hades and as the symbolization of and independent woman who lost her innocence and who could decide for herself for the time after becoming the queen of the underworld. In a myth, for example, Aphrodite’s lover Adonis asked for Persephone’s help for he needed a way to be hidden from Aphrodite’s husband and she agreed to help him. However, she refused to give Adonis back to Aphrodite since she also became a captive of his charm.  This was the moment when Persephone was considered to have lost her innocence and become an independent woman. It was Zeus who made a decision about the dispute and he decided that Adonis would be spending a third of each year with Aphrodite and another third with Persephone, rendering him free for the last third of the year.

In Greek mythology Persephone was considered as the harbinger of spring, growth and hope, however, she also had a dark side having had a dark wisdom as the queen of the underworld.