Ares was known to differ from his Roman counterpart with being more cruel and loving the bloodshed caused by war. Because of these qualities Ares became one of the Greek gods hated and feared the most by people.

Some accounts told that Ares did not have distinctive physical features and that is the reason he was not depicted very clear in sculpture and in paintings. However, in most account he was described as a very handsome male who had many affairs using his physical qualities.

Ares’ affair with Aphrodite is one of the most famous myths regarding the god of war. According to the story Aphrodite’s husband, Hephaestus caught the lovers and trapped them in chains. All the other Gods came to see them in shame and Ares was deeply humiliated by that. However, Ares never quit his affair with Aphrodite and even went to kill Adonis, one of Aphrodite’s lovers. Ares and Aphrodite had six children from the affair they had; Eros, Harmonia, Adrestia, Demios, Anteros and Phobos.

There are two gods of war in Greek mythology; Ares was known as the god of war that symbolized physical attributes of the war and the bloodlust and Athena was the goddess of intelligence, bravery, warfare strategies and skills. 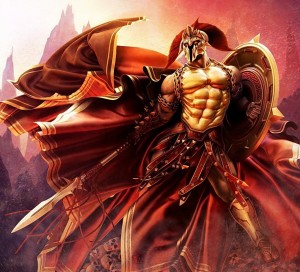 In one of the myths Ares was told to have a conflict with the god of sea, Poseidon. Ares killed Poseidon’s son Halirrhotius because he raped one of Ares’ daughters, Alcippe. Poseidon called for a meeting of Olympian gods for a tribunal to judge Ares for this crime. The Gods judged and acquitted Ares on top of a hill which is known today as Areopagus, meaning the Hill of Ares.

Ares was also known to have participated in the Trojan War.  He was warned by his father, Zeus, to not to take any side on this war but he ignored these warnings. Convinced by Aphrodite to fight beside Trojans, Ares decided to join the battle; however, Athena stopped him by taking his shield, helmet and spear. Yet, some accounts told that Athena actually stopped him by throwing a boulder on him.

Ares is usually depicted with a spear in his hand but on occasion he can be seen with a vulture or dog beside him, which are known to be other symbols of him.