Hephaestus, also known as Hephaistos, is the Greek god of fire, the forge, volcanoes, craftsmen, blacksmiths, technology, metals and sculpture in mythology.

Hephaestus/Hephaistos is one of the sons of Zeus and Hera, however, Hera was told to be the only parent of him in some myths. He is also the husband of the Greek goddess of beauty,  Aphrodite.

Although he is not one of the most prominent figures in Greek mythology, there are several myths involving Hephaestus which makes him vital to the stories of others.

Hephaestus And Pandora, The First Woman Ever Created

According to the myth, Hephaestus created the first woman out of clay upon being requested by Zeus after he saw all the people created by Prometheus had one gender; they were all male.

The first woman created out of clay was named Pandora and she is known to be the person who released all the evils of the world from a magical box (or a jar) they were contained in.

Hephaestus God Of The Forge, The Blacksmith Of Gods

Hephaestus/Hephaistos was the blacksmith of gods in Greek mythology and he crafted many of the supernatural equipment worn by gods.

Among this equipment are Agamemnon’s staff, Achilles’ armor, krotala – the clappers used by Heracles to chase away Stymphalian birds, Eros’ arrows and bow, the breastplate of Aegis, the girdle of Aphrodite, Helios’ chariot, Hermes’ helmet and sandals as well as Zeus’ thunderbolts.

The Cyclopes helped the god of the forge while he was crafting.

One of the most important myths involving Hephaestus is about the affair between his wife, Aphrodite and Ares. Learning about the relationship between Ares and Aphrodite, Hephaestus built a device to trap the two lovers in chains.

He caught them in a net of chains and brought them to Mount Olympus to humiliate them. Poseidon convinced Hephaestus to release the lovers provided that Ares would pay for what he did.

Hephaestus and Aphrodite did not have any children according to the myths, however, Virgil, the famous Roman poet, suggested that Eros was a child born out of this marriage.

The Greek god of fire was mostly described as a crippled and weak god in the accounts/Greek myths. According to the story, being upset with her son, Hera threw Hephaestus out of Mount Olympus.

It should be noted, however, that some myths suggest he was thrown out of the mountain by Zeus since he defended Hera against Zeus in an argument.

Hephaestus took revenge from his mother by crafting a golden throne for her, which was actually devised to trap and prevent her from leaving.

Other gods tried to convince Hephaistos to return to Mount Olympus and release his mother but he rejected them saying he did not have a mother anymore.

It was Dionysus who solved the conflict in the end. Dionysus tricked Hephaestus into drinking his wine, made him unconscious and carried him back to Mount Olympus. 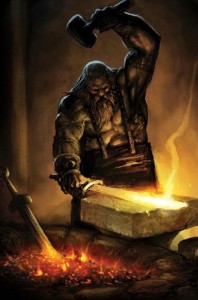 In some accounts, it was told that Hephaestus wanted Athena to be his wife but she refused him saying he was too ugly for her.

In most of the artworks, Hephaestus was depicted as an ugly and crippled man with beards. In literature as well as in some paintings, he was depicted as a man walking with the help of a stick.

Hephaestus’ Symbol – The Greek God Of Fire And His Symbols

Known as the Greek god of the forge and blacksmiths, tongs, anvils and hammers can all be individually considered to be the main Hephaestus symbol. No specific descriptions were made in the myths.

Other Hephaestus symbols include volcanoes and obviously fire as he is the Greek god of fire.

Guard-dogs, donkeys and cranes are Hephaestus’ sacred animals. Fennels are known to be his sacred plants.

Hephaestus’ Roman name/counterpart is Vulcan. Vulcan is the Roman god of fire, metalworks and the forge in mythology.

Hope you liked our post on Hephaestus, the Greek god of fire and the forge. Share it on social media please, thanks!