Perseus was one of the most famous heroes in Greek mythology. He was the son of Zeus and Danae, the daughter of Akrisios, the King of Argos.

According to the myth, Akrisios was very upset about the fact that he could not have a son and he was told by an oracle that he would be killed by his daughter’s son one day. So, Akrisios kept his daughter in a bronze chamber   inside his palace to prevent her from getting pregnant ever. However, Zeus impregnated Danae by transforming himself in a golden shower. Akrisios put his daughter and grandson in a chest and left them in the middle of the sea. Danae and Perseus were washed ashore on the island of Seriphos and found shelter at the home of Dictys who was actually the brother of King Polydectes of Seriphos Island. 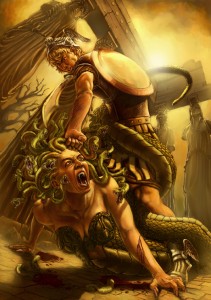 King Polydectes fell in love with Danae around the time Perseus became a man but Perseus did not approve Polydectes’ interest in his mother. So, Polydectes assigned a dangerous task to Perseus to get rid of him; he wanted Perseus to slay the Gorgon Medusa, whose eyes were known to turn people into stone. Another distinctive quality of Medusa was her hair turned into snakes by Athena since Medusa committed sacrilege by having intercourse with Poseidon in the Temple of Athena.

In his dangerous mission to slay Medusa, Perseus was aided by many gods. Athena told Perseus that he had to find Hesperides and they would give him a knapsack to carry Medusa’s head in. He tricked Graeae into telling where Hesperides were and got the knapsack form Hesperides. His father, Zeus gave him Hades’ helm of invisibility and a sword made of adamantine whereas Athena gave him a shield  and Hermes gave him his winged sandals to make him able to fly. He approached Medusa from behind and beheaded her. Perseus escaped the scene by using Hades’ helm of invisibility.

On his way back home, Perseus encounters Princess Andromeda who was about to be sacrificed to a sea monster, namely Cetus. He killed Cetus and saved Andromeda. He married to Andromeda later although Andromeda was promised to another man, Phineus. It was told that there was an argument between Perseus and Phineus during the wedding and Phineus was killed by the looks of Medusa’s head that Perseus kept with himself. Perseus lived in Mycenae with Andromeda and according to some accounts he was also the founder of Mycenae.