Prometheus is the Titan who stole the fire from Gods and gave it to the mankind. He is also known as the Titan who created man from clay. He was the brother of Atlas and Epimetheus and one of the three sons of Iapetus.

The word “prometheus” means “forethinker”  but some of the modern linguists suggest that the name is derived from the word in “pramathyus” Vedic Sanskrit, which is a form of Old Indo –Aryan language, meaning “the thief”. Prometheus was told to have the ability to foresee the future in some stories and he was also known as “the wise Titan god”.

After his victory in Titanomachy (the war of the Gods and the Titans) Zeus banished the Titans to Tartarus, however, Prometheus was spared by Zeus since he did not fight against Gods like other Titans.  It was Zeus who gave the task of creating man from water and earth to Prometheus. Zeus did not want man to have power and he did not want the mankind to have the knowledge of fire in particular. As their creator, Prometheus had become more loving of mankind and he wanted humans to have a better life. So, he stole the fire from Gods and gave it to humans. 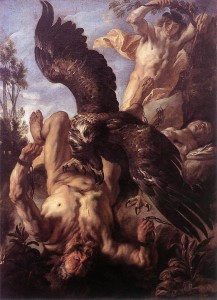 It was also known that he stole the knowledge of some skills from Athena and Hephaestus and brought them to man. He was known as a trickster god and it was told in some myths that he actually made the mankind keep the best part of the animals sacrificed to gods and tricked Zeus into letting that happen. He was the benefactor and protector of humans. According to one of the myths, Prometheus and his brother,  Epimetheus, were assigned to creating the mankind together and Prometheus asked Epimetheus to give different qualities to various creatures on earth such as strength, being able to fly (wings), agility and astuteness. However, when it was time to reward the mankind with a quality Epimetheus was already out of qualities to give and this was told to be the reason why Prometheus stole the fire and gave it to man, to render them special just like other creatures were.

Being furious at Prometheus because of his betrayal, Zeus started punishing him by hurting who he loved the most; his brother and the mankind.  This part of the myth will be revealed later in the story of Pandora.

Prometheus kept rejecting Zeus’ authority and Zeus answered this attitude by punishing him directly this time. He made Hephaestus (and Hermes according to some accounts) chain Prometheus to Mount Caucasus. An eagle came to eat Prometheus’ liver every day and his liver grew back getting ready for the eagle to torture him again the next day. Prometheus endured this pain for 30 years until Hercules found him on the mountain and killed the eagle.