Ra is the god of sun in Egyptian mythology. Meaning of his name could not be determined exactly, however, it is considered to have the meaning “creative power”. He was one of the most important gods in Egyptian religion of ancient times. Ptah’s followers suggested that Ptah created Ra but in most of the myths Ra is told to have been created out of the chaos at the beginning of the time.

According to the myths, Ra ruled the whole universe formed of the earth, the sky and the underworld. He also created all the living creatures by calling out their names which were not known to anyone but him. It is believed that Ra cried and humans were created from his tears. This is the reason why people of Egypt call each other “Cattle of Ra”. Ra was also told to have created plants, animals, months and the four seasons.

Many rulers of Egypt claimed that they were the descendants of Ra and used “sa Ra”, meaning “the son of Ra/Re” as a part of their names. 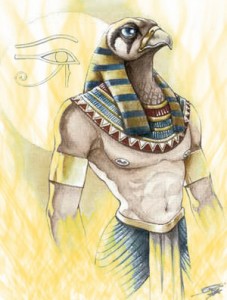 As the god of sun, which is indeed a fire by the nature, Ra needed a boat to travel between the earth and the waters of Duat, the underworld, and the heaven. He had two boats; Mandjet, his boat for daytime travels and Mesektet, his boat for nighttime travels. According to the myths Ra was accompanied by many gods during his journeys by his boats.  Horus was told to be captain of Ra’s boats with Ma’at and Thoth beside him. Sia (intelligence), Heka (magic), Hu (command) and Geb were other gods accompanying him during these travels.  Uputaut, the deity known as “the god who opens the paths”, was told to join these deities at nights to provide Ra with guidance.

According to the belief, Ra was living on the earth at the beginning ruling the world but people started doubting his capability as their God.  Ra’s daughter, Goddess Hathor was considered as his Eye and Ra sent her to punish humans who questioned his capability. Ra moved and started to living on the sky after that. Egyptian people blamed themselves for when Ra left the earth and people behind and moved to the sky. Some other gods in Egyptian belief like Osiris acted in Ra’s stead and human kings, pharaohs, took over the job from them as the time passed.

As one of the most important names in Egyptian mythology Ra was kind of merged with some gods other gods such as Horus and Amun (becoming Amun-Ra). He was symbolized by a hawk or falcon, however, it was observed that a lion was used in some depictions as his symbol.