Cronus (Cronos or Kronos) was the son of Uranus (the Sky) and Gaia (or Gaea, the Earth) and he was the youngest of the first generation of Titans.  One of her sisters, Rhea, was Cronus’ consort and they had six children together, namely Demeter, Hestia, Poseidon, Hera, Hades and Zeus.

According to the myth, Uranus offended Gaia by imprisoning her children, Cyclopes and Hecatonchires (giant creatures with hundred hands) in Tartarus. So Gaea devised a plan to overthrow Uranus and met with her sons including Cronus. She tried to convince them to castrate their father but, motivated by his jealousy against his father’s power for ruling the cosmos (the universe), Cronus was the only son willing to do the deed. When Uranus came to meet Gaia, Cronus approached his father and castrated him. Cronus cut Uranus’ testicles off causing his blood (or his semen according to some versions of the myth) to spill over the earth.

It was told that giants, furies and nymphs were born when Uranus bled on the earth. It was also believed that Aphrodite was born out of the foams caused by Uranus’ testicles falling in to the sea. According to Hesiod, the name Aphrodite was derived from the Greek word “aphros” meaning “foam”. 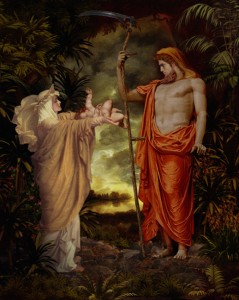 Cronus and Rhea, the Golden Age

After dethroning his father, Cronus took over the reign of the universe accompanied by his sister and consort, Rhea. The age during which Cronus and Rhea reigned over the cosmos is called the Golden Age in mythology since it was an age of order and prosperity and there was actually no need for any rules and laws to prevent people from behaving immoral.

Some time after Cronus’ reign started, Gaia and Uranus told Cronus that he would have a very similar fate to his father and be killed by his own son. Being anxious about this prophecy, Cronus swallowed all his children as soon as they were born. Rhea was not pleased with the situation and she consulted Uranus and Gaia right before the birth of Zeus. They made a plan to save Zeus from Cronus and Gaia gave Rhea a stone (Omphalos Stone) to feed Cronus with.

Zeus grew up, confronted his father and made Cronus throw out his siblings one by one by using an emetic that Gaia gave him. Some accounts told that Zeus actually cut open his father’s stomach to take his siblings out. Zeus also freed Cyclopes, Giants and Hecatonchires in addition to his brothers and sisters.

Titanomachy and Imprisonment of the Titans

Following Zeus’ confronting with Cronus, a war broke out between Titans and Gods. Aided by some other Titans, Cyclopes, Giants and Hecatonchires, Zeus and his siblings defeated the Titans in this war called Titanomachy. As the new rulers of the universe, Gods imprisoned Titans in Tartarus except Epimetheus, Menoetius, Oceanus, Prometheus and Atlas (It is told in some versions of the myth that Cronus was actually imprisoned separately in the cave of Nyx for eternity).

It was told in some accounts that Zeus released Cronus and his brothers and made Cronus the king of Elysian Field (Elysium).

Cronus was symbolized by a scythe or a sickle in Greek mythology (as the tool he used to castrate his father) whereas an hourglass is also considered as one of his symbols in Roman mythology since he was considered as the Titan god of time.

Cronus’ counterpart in Roman mythology is Saturn and the last day of Judeo-Christian week has been named after Roman god Saturn being derived as Saturday from “Saturn’s Day”.