Hestia is the goddess of the home, hearth and architecture in Greek mythology. She was the first child of the Titans Cronus and Rhea and the sister of Poseidon, Zeus, Hera, Demeter and Hades.  The word “hestia” meant “hearth” or “beside the hearth” in Ancient Greek language.

She is called “The First and the Last” because she was the oldest sibling among The Original Six Olympian gods and she was also the last sibling to be disgorged by Cronus.

Hestia had kind of an introverted character and she was a very private goddess. She was in peace with herself and she had a very content personality. It is told in the myth that Poseidon and Apollo wanted to marry her but Hestia told Zeus that she wanted to remain a virgin and made a wow to not to get married ever. She said that she did not want to live her life like Aphrodite did with being guided by her romantic desires. She preferred to go on her own path following her fate on her own.

Zeus was kind of happy with Hestia’s decision to remain a virgin since he did not want a war to start between Poseidon and Apollo, the gods who asked for Hestia’s hand in marriage.

Hestia devoted herself to her family and the community. Zeus left Hestia the key to the estate of Gods on Mount Olympus and she took care of the estate when other gods and goddesses were away for their adventures. She managed the household perfectly and always ensured there was ample amount of food and drinks when the other gods/goddesses came back.

It was also considered as Hestia’s duty to prepare meals for the family. She had a very calm, kind and caring personality and she was known to comfort the other gods and help them with their problems.

Hestia was also a very hospitable goddess and this is the reason why some of the inns, accommodation places and restaurants were and are still being named “Hestia”. According to the myth, Hestia considered it an offense to refuse strangers who visit as guests.

Hestia never stood out among the other gods and goddesses in Greek mythology because she chose to stay away from adventures and she was in peace with herself. This is the reason there are not so many myths about her. The most significant story about Hestia is related to Priapos attempt at raping her.

According to the myth, one night Priapos, a minor god of fertility, came to the room Hestia was sleeping in to rape her. But as he was about to make his move a donkey started to bray and woke Hestia up. She screamed and wakened all the other gods and Priapos fled the scene. 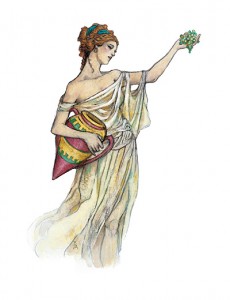 Although Hestia had a withdrawn personality, it was told in Homeric Hymns that she had indeed a great friendship with Hermes, ironically, the most chatty god among all gods. It was told that they were neighbors to each other and became very good friends.

Hestia was also the goddess of architecture in Greek mythology and she suggested that a house should be built around a hearth, her symbol which was considered to be a part of her flame, at the centre.

Hestia’s counterpart in Roman mythology is Vesta. The sacred hearth and a flame in general are considered as her symbols and she is mostly depicted by the side of a hearth in art.