The word doppelganger is the English form of the name “Doppelgänger” in German meaning “double goer/double walker”. This word was firstly used by Jean Paul in his work Siebenkäs in 1796 and derived into English later.

What is a Doppelganger?

Definition of a doppelganger varies between the accounts of the old ages. They were mentioned as double spirits of human beings since the very old times. They were also mentioned as apparitions or reflections of people.

Although they looked exactly the same or indistinguishably similar with the person they impersonated, doppelgangers were not twins of these people.

It was stated in some mythological accounts that doppelgangers cast no shadows and had no reflections in the mirror.

In Ancient Egypt a person’s double spirit was named “ka” and it was told in The Greek Princess, a work describing the Trojan War from Egyptian people’s point of view, that Helen’s ka was used to fool Paris.

“Vardøger” (vardøgr or varsel) in Norse mythology can be considered as another reference to doppelgangers. A vardoger was the ghost-like double spirit of a person which was seen doing the actions of a person before he did it, kind of like a reverse déjà vu that actually happens.  In Norse mythology it was also interpreted that these beings might be some kind of bilocation (existing at two locations at the same time) as well as guardian spirits for a human being.

Famous Doppelganger Stories in the History

Doppelgangers are mostly known as harbinger of bad luck and it is believed that seeing a person’s doppelganger brings illness to that person’s relatives. 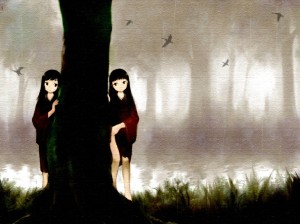 On the other hand, according to the myths, it is a much direr situation when a person sees his or her own doppelganger since it will mean that person will soon die. In fact, there is a very popular story being told as a reference to this belief.

Noah Brooks wrote in his book named Washington in Lincoln’s Time (1895) that the 16th president of the United States of America, Abraham Lincoln told him that he saw his standing reflection in the mirror while he was on the other end of the room lying down. Lincoln tried to get close to the reflection but it disappeared when he stood up and came back when he lay down again.

Lincoln told his wife that half of the reflection was a little paler than the other half and his wife, Mary Todd Lincoln, interpreted this meant Lincoln would serve as president until the end of his first term but would not be able to do it for his second term (To answer the question in your mind, yes, Lincoln was actually assassinated shortly after he was elected as the president of USA for his second term).

In addition to Abraham Lincoln seeing his doppelganger (supposedly), John Dunne, one of the most important names of English poetry in 17th century, said that he saw the doppelganger of his wife in Paris only to come back home and learn that she just gave a stillbirth. Also, the apparition of Sir George Tyron, the Vice-Admiral of London during Victorian era, was seen at a party while he died at the sea on the very same night.

Doppelgangers in the modern time are depicted as creatures that can mimic a person’s behaviors and appearances rather than an apparition of them. In CW’s popular show the Vampire Diaries, two main characters Stefan Salvatore and Elena Gilbert are the last two of the doppelgangers star-crossed throughout the history as Amara, Katerina Petrova (Katherine), Tatia and Elena (female) with Silas, Stefan Salvatore and Tom Avery (male).