Griffins or gryphons are winged mythical creatures with a lion’s body, an eagle’s head and ears resembling a horse’s ears. Rest of the physical features differs between the myths, i.e. they are sometimes depicted without wings.

Griffins are most commonly mentioned in Greek mythology, however, the myth regarding Griffins originated from Ancient India.

It is believed that the traders traveling from Europe to Mongolia through the Silk Road carried their observations about the fossils of winged creatures found near gold veins. These fossils, which were later determined to be of dinosaur species named Pentaceratops, were the source of the myth about griffins.

Indians believed at the time that these beasts, which were very skilled at finding gold and mining it from rocky places using their strong beaks, were guarding their gold or treasures.

They built their nests near gold veins to protect what is theirs and that is why those fossils were interpreted as they belonged to griffins.

In Greek mythology tales were told about the fight between griffins and Arimaspians, one-eyed people who lived in northern part of Scythia (which is the area covering parts of Ukraine, Kazakhstan, Turkmenistan and Russia today).

According to the legend Arimaspians wanted to steal gold from griffins and, the hostile guards that these beasts are, griffins killed them. Some stories mention that griffins also ate men and their horses.

Although their story with the Arimaspians is the most significant one related to griffins, myths about these creatures were not limited to Greek mythology; they were also a part of Persian and Egyptian mythologies.

Some legends have it that griffins were able to talk and loved to trick men when they encountered them. They asked people riddles and rewarded them with gold if those people knew the answers to those riddles. If they did not, griffins would slay them. 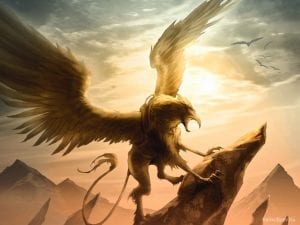 Another reference to the creature named griffin is made in some accounts telling the stories of Apollo, the god of sun, music, prophecy and healing in Greek mythology. Apollo’s chariot was pulled by griffins according to some versions of myths about the god.

Since they symbolized strength and wisdom, griffins were used commonly in heraldry ornamenting banners of tribes and nations throughout Europe.

In his work named A New Dictionary of Heraldry, author Stephen Friar stated that claws of a griffin could heal a person and its feathers restored sight for blind people.

On an interesting note, it was mentioned in many accounts of the medieval ages that a griffin mated once in a lifetime and never mated again if its partner died. This was later symbolically used by the church in the propaganda against remarriage.

Griffins were creatures of glorious strength and wisdom and unique with their physical features, however, no specific griffins were mentioned in the accounts by their names.