If you love science or Greek culture, you are probably very familiar with Greek symbols. As part of our symbols dictionary, in a comprehensive article dedicated to them, we have examined the Greek symbols/letters in Greek alphabet a few weeks ago. Now, it is time to shine a light on the theta symbol, its meaning and uses in science.

The Origin and History Of The Theta Symbol

Theta is the eighth letter in the Greek alphabet written as Θ or ϴ in uppercase and θ in lowercase. Theta symbol is a derivation of the letter teth in the Phoenician alphabet. In the Phoenician language, teth was used to describe a wheel.

The early forms of the theta symbol were a cross inside a circle, a horizontal line across a circle and a dot right in the middle of a circle. It is also known that early Cyrillic fita (Ѳ )letter is derived from the theta letter.

These early forms are also very similar to some symbols used by other ancient cultures. According to the Roman philosopher Porphyry, Egyptians used a circle with an X inside it to represent the soul. It was also the symbol of the Great Ennead, the nine deities in ancient Egyptian culture. Nine is known as the value of theta in the Greek numeral system. 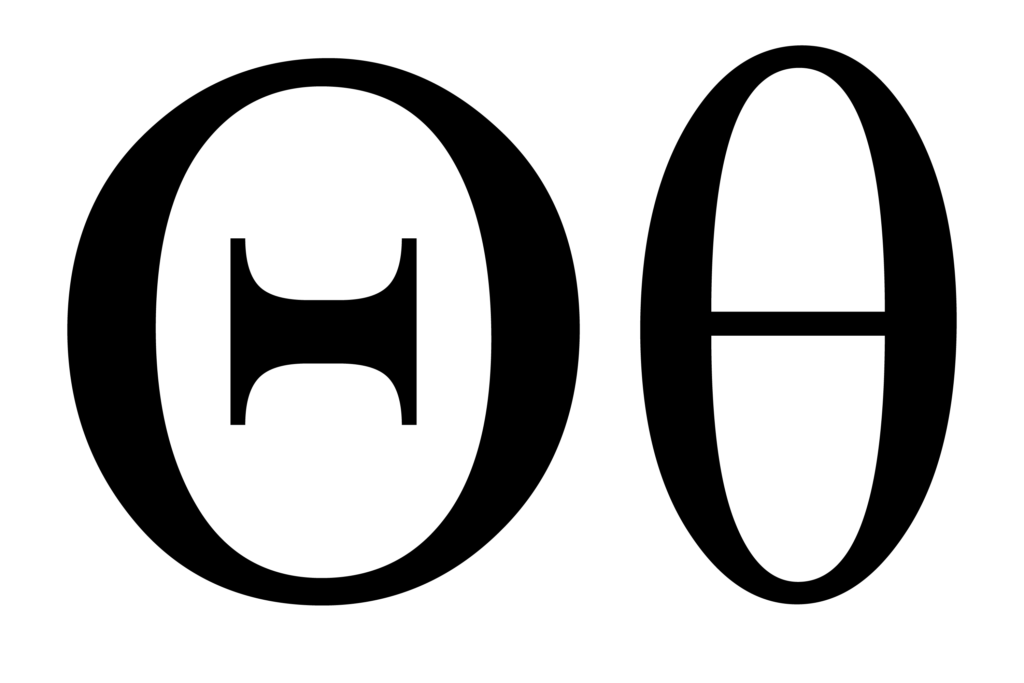 According to John the Lydian, also known as John Lydus, a 6th century Byzantine writer, a symbol very similar to theta was used to describe ‘kosmos’ by the ancient Egyptians. This symbol was comprised of a snake representing Agathodaemon (Agathos Daimon) across a fiery circle representing the world.

The sun disc in ancient Egyptian culture is basically the same with one of the earlier forms of theta symbol; a dot in the middle of a circle.

Ancient Greeks also used the theta letter as a symbol of death as it looked a little bit like a human skull. It was also used by the Greeks as the abbreviation of the Greek word for death, thanatos (θάνατος).

On an interesting side note, theta was also called “the unlucky letter” in ancient Greece as judges used it on their ballots while passing sentences on criminals.

The counterpart of the theta letter in English would be the “th” sound.

Theta Symbol In Science – What Does Theta Represent In Science?

Just like many other Greek symbols, the theta symbol was also used commonly in science to denote various things.

Lowercase Theta Symbol And Its Uses

In trigonometry, the theta letter denotes unknown variables while it represents a plane angle in geometry.

Potential temperature is represented by the theta symbol in meteorology. It denotes a specific bacterial DNA replication unique to circular chromosomes in biology while in economics it represents the reserve ratio of banks.

Uppercase Theta Symbol And Its Uses

In set theory, the uppercase theta letter represents a certain ordinal number while in particle physics it represents pentaquarks (a type of subatomic particles ) and exotic baryons.

Theta symbol also denotes the temperature difference that occurs during a heat transfer as well as the dimension of temperature.

Along with alpha, beta and delta, theta letter is also used to denote a specific brain signal frequency.

This is all about the theta symbol, its origins, uses and symbolism behind it. If you would like to read our extensive post about the Greek symbols, check out our post below:

You might also want to read our individual posts about other Greek symbols like the omega, alpha, and delta symbols. Please kindly check out our symbols and meanings section or do a simple search for that.