We have been going over symbols from many different cultures on Mythologian and now it is time to shine some light on symbolism in Irish culture. For those who have been wondering, here are the most important Irish symbols and their meanings:

Derived from the Irish word seamróg, shamrock is the name for the three-leaf clovers known as one of the most common symbols of Ireland. Shamrock means “little and/or young clover” and the plant has been an important symbol for Irish people since the time of the Celts.

Some experts suggest that shamrocks were sacred for the Celts as threes and trinities were of significant importance to the Celtic religion. It might have been used as a symbol of Mother Nature’s power of regeneration.

However, how and when the shamrock was introduced to Irish culture as a symbol is still being argued.

An expert on mythology and symbolism, Professor Patricia Monaghan argued that the plant was not an important symbol in Irish culture before Saint Patrick Christiniazed the pagan Ireland.

According to the legend, seeing the importance of trinities for the pagan druids of Ireland, Saint Patrick used the three-leaf clover, shamrock along with the Celtic cross to introduce the Holy Trinity concept of Christianity to the people of Ireland.

Some works of art and St. Patrick halfpennies minted in the 17th century depict Saint Patrick holding a shamrock driving serpents away from Ireland.

Therefore, it is safe to say that the shamrock is a religious symbol for the Christian people of Ireland.

The Four-leaf Clover, Symbol of Luck, Love, Hope and Faith

At this point, I should address a possible confusion here: this symbol, the shamrock is not the symbol of luck, so-called Irish luck, that is. 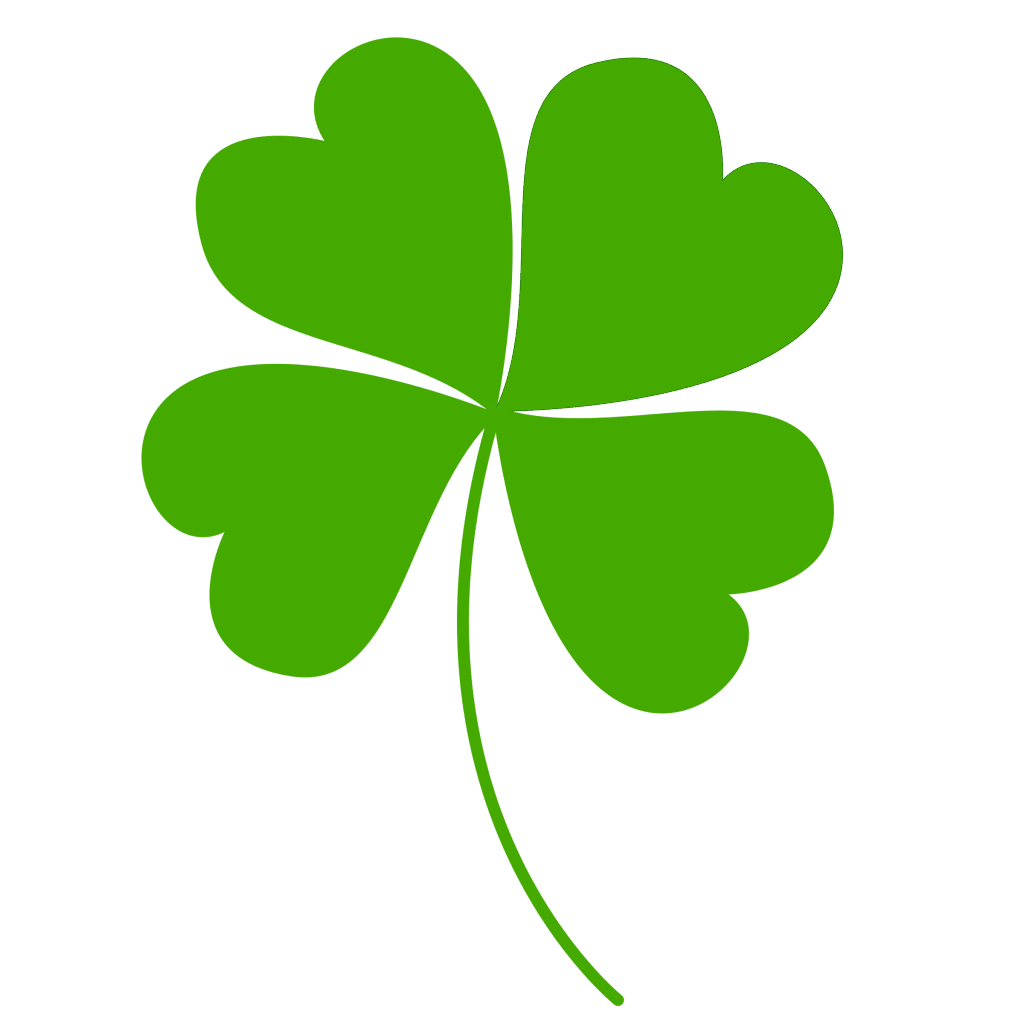 That plant considered Irish symbol of luck is the four-leaf clover, a rare variation of the usual shamrock. According to the belief, those four leaves represent love, hope, faith and luck.

The four-leaf clover, which is thought to be the result of a genetic process, comes into existence once in 10,000 times, probably a big part of the reason why it is considered to bring luck to the people who might find them.

Leprechauns are a type of fairies in Irish folklore and mythology. They are known as bearded, little, ginger men that grant three wishes to the person who can capture them. 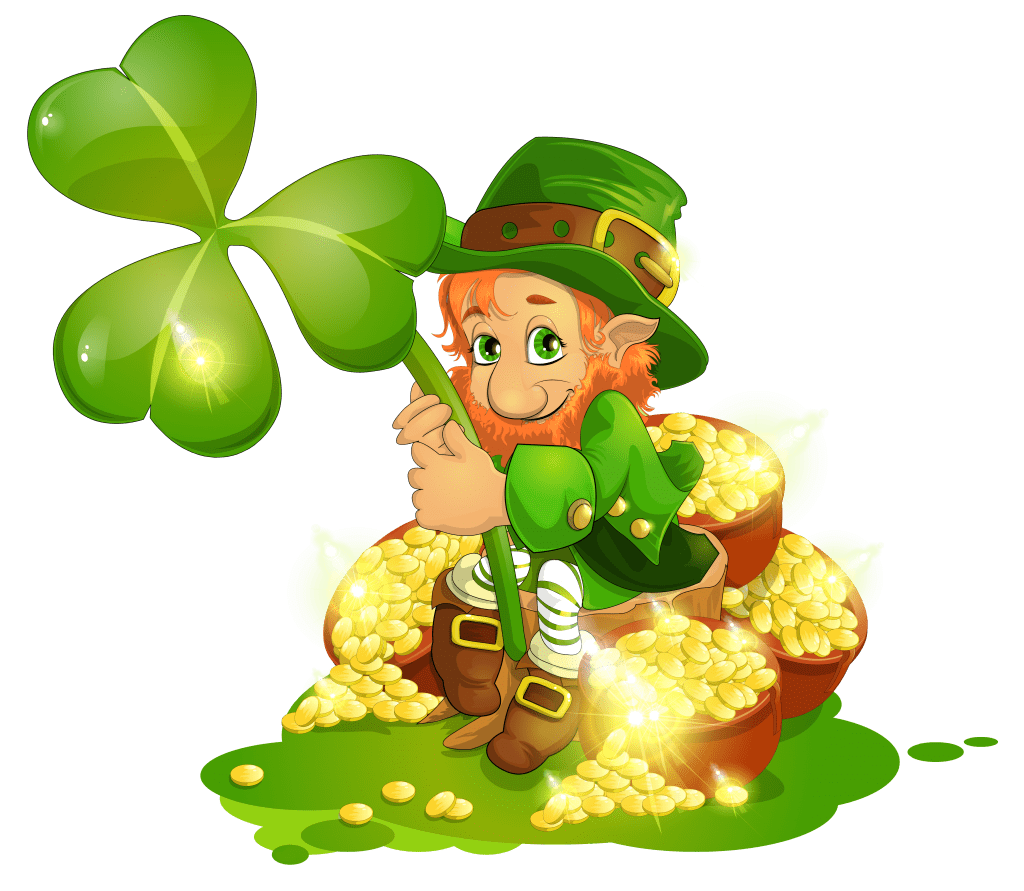 The earliest reference to leprechauns were made in the medieval Irish tale Echtra Fergus mac Léti (Adventure of Fergus son of Léti) about the King of Ulster, Fergus mac Léti who was abducted by leprechauns but then captured them to set himself free.

Legend has it that leprechauns have a hidden cache of gold at the end of the rainbow.

Over time, these wee men with red beards became almost synonymous with Irish people and it is possible to see many Irish people wearing a leprechaun costume on St. Patrick’s Day.

Also known as the Celtic harp, the Gaelic harp and the clàrsach (by the Scottish people), the Irish harp is an Irish symbol of significant importance.

Throughout the history of Irish people, the instrument has always been important  and it is the official emblem of Ireland.

The Irish harp’s history goes back to 1000 years ago. It is believed by some people that Brian Boru, the last High King of Ireland (941-1014) was a talented harpist himself. 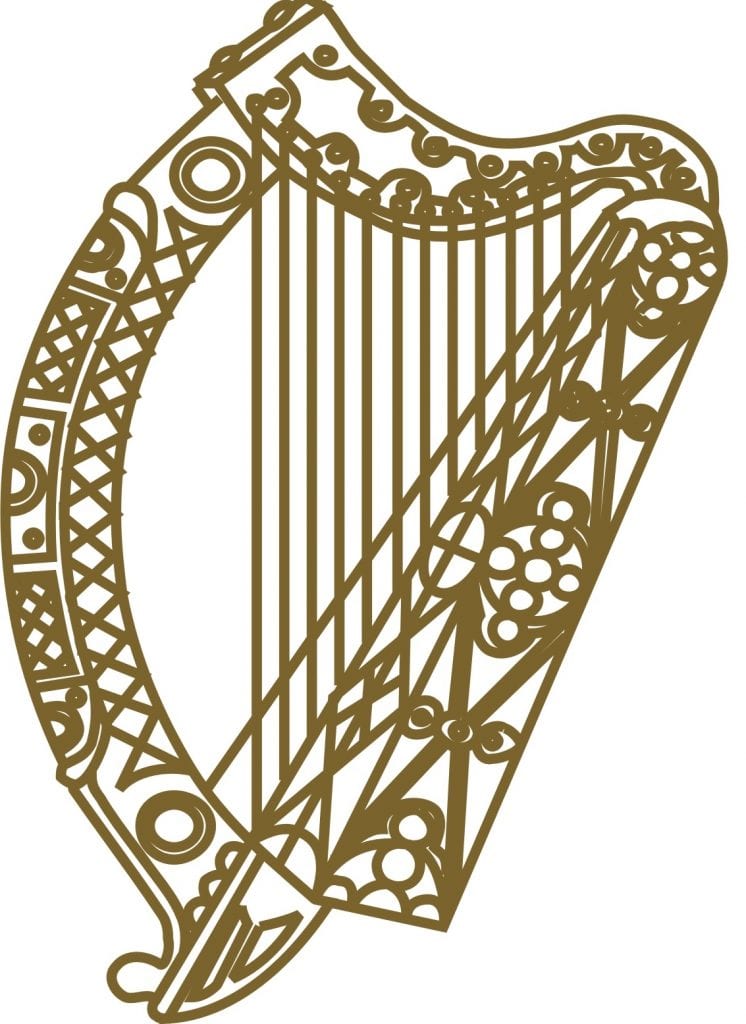 In addition to that, the harp was the only instrument played during the Crusades in 12th century according to some accounts.

Many kings of Scotland and Ireland had their own resident harpists and being a harpist granted many privileges as these musicians were revered amongst the social elite.

Always known as a symbol of “Irishness”, the harp became a symbol for the resistance of Irish people against the Crown of England. That is why it was banned by the Crown by the end of the Middle Ages.

Today, many Irish companies and institutions use the harp in their logos and emblems.  You can see the instrument on the emblem of the National University of Ireland, the Presidential Seal, the bottles of Guinness beverages and the logo of Ryan Air, an Irish airline company.

The Celtic Cross is another significant Irish symbol the history of which goes back to a long time ago, the 4th century to be exact. 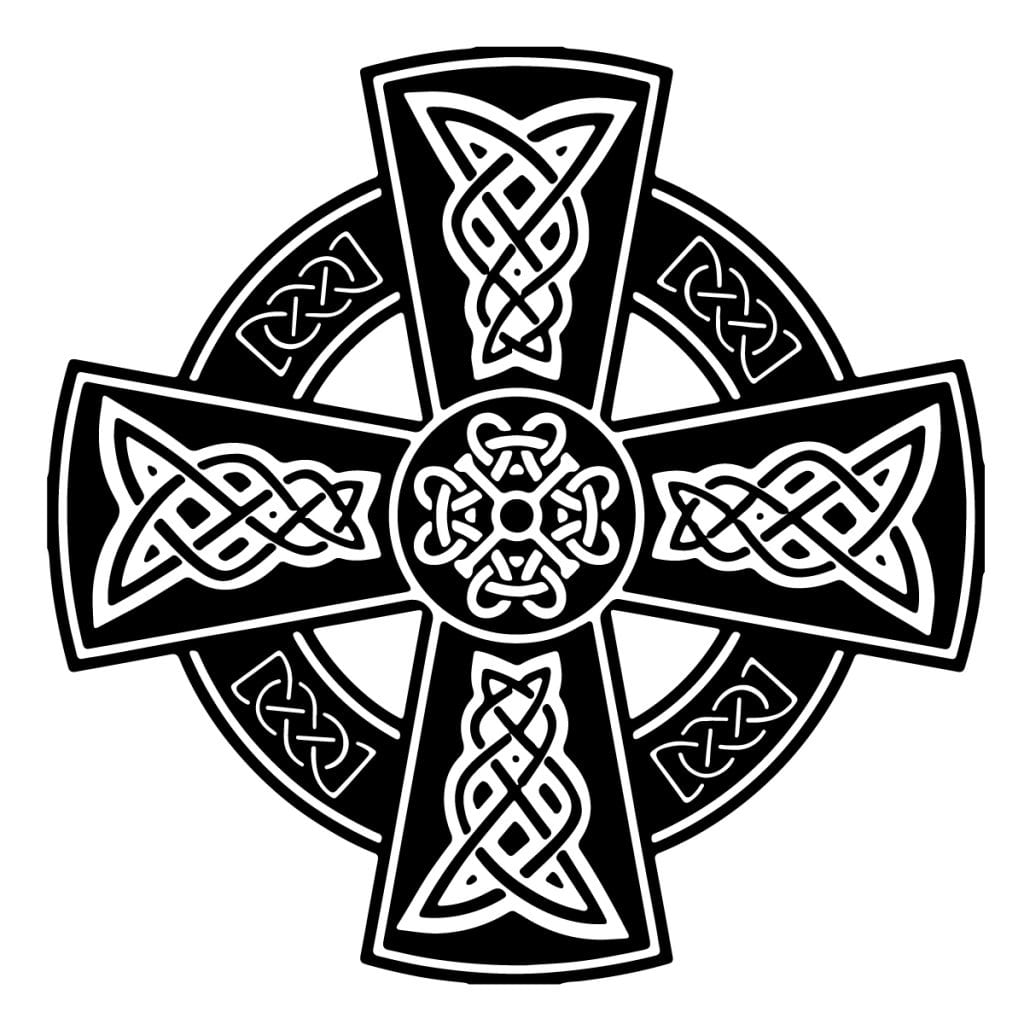 It is widely believed that this cross was created by Saint Patrick by combining the Celtic circle representing eternity with the Christian cross to convert pagan Irish people who believed in the regenerative powers of the sun.

However, many experts argue that the Celtic cross actually predates Christianity and Saint Patrick.

To learn more about the Celtic cross along with other important Celtic symbols,  you can read our article titled Celtic Symbols and Their Meanings.

Based on the fede rings that originated in Roman times (although actually the design might predate the Romans), Claddagh rings are another symbol of Irish culture. 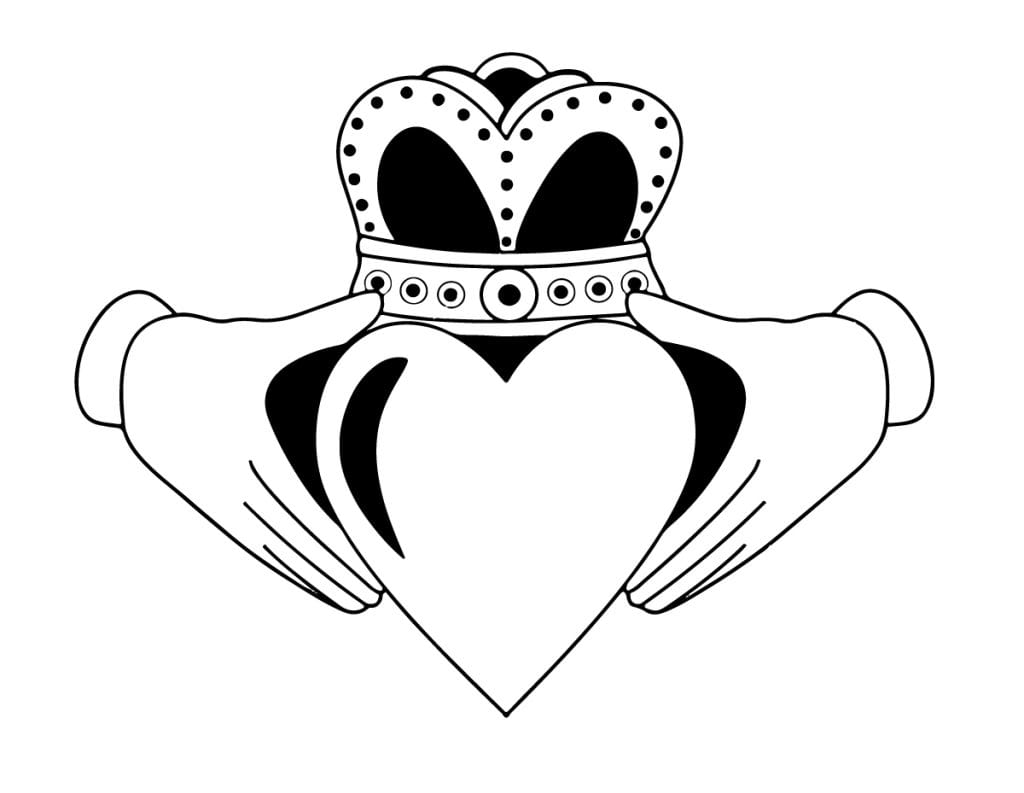 Mainly Claddagh rings represent unity, marriage love, loyalty and promise although they take on different meanings according to how and where on their hands people wear them.

You can learn more about these different meanings and the interesting origin story of Claddagh rings also in our article regarding Celtic symbols.

Brigid’s cross is a small cross woven with rushes with a square in the middle of it. Brigid’s cross, also known as Brigit’s cross (Cros Bríde, Crosóg Bríde or Bogha Bríde in Irish), has four equal arms although there were some with three arms according to historical accounts.

The origin of this Irish symbol is a matter of debate. While some experts suggest that the symbol predates Christianity and attirbute it to Brigid,  a goddess in Irish mythology, others suggest that this is the symbol of Saint Brigid of Kildare, a patroness saint of Ireland.

According to Celtic origin story of Brigid’s cross, on the first day of Imbolc and the feast day of  Brigid (February 1) considered to be the beginning of spring, pagan Irish people made these crosses and hung them in their homes to welcome spring.

Some also believed that hanging these crosses would protect them against evil and danger, particularly fire.

The Christian origin story, on the other hand, suggests that this symbol belonged to Mary of the Gael, Saint Brigid of Kildare who converted a pagan chieftain on his deathbed by weaving a cross from rushes and explaining the meaning behind the cross.

Since then, Irish people have been weaving this cross from rushes on the Feast Day (February 1) every year to honor the patroness.

These are the most prominent Irish symbols you should know about but be sure to read the detailed article regarding Celtic symbols as well since these two posts complement each other.