Rhea is the Titan Goddess born as the daughter of Uranus (the god of sky) and Gaia (the goddess of earth, Mother Earth). She was the sister of Titans Cronus, Tethys, Theia, Phoebe and Themis. Her consort was her brother Cronus with whom she was told to have reigned during the Golden Age in Greek mythology.

Rhea was mentioned as the Mother of Gods in mythology. She had six children from Cronus; Demeter, Hera, Hestia, Zeus, Hades and Poseidon and was considered as the mother of the Olympian gods and goddesses by the Greeks in the classical age.

The name ‘Rhea’ means flow and ease and some mythology experts suggest that she represented the eternal flow of time (as the wife of Cronus, who was sometimes identified with the time in some literature). She is also known as “the Queen of Heaven”

Rhea was a Cretan goddess and fertility rites were performed in Crete in her name.

Rhea and Cronus, the Golden Age

After dethroning his father, Cronus took over the reign of the universe accompanied by his sister and consort, Rhea. The age during which Cronus and Rhea reigned over the cosmos is called the Golden Age in mythology since it was an age of order and prosperity and there was actually no need for any rules and laws to prevent people from behaving immoral. 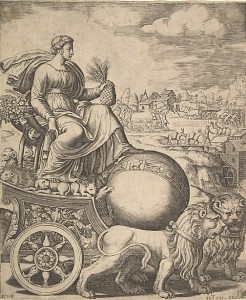 The most important myth regarding Rhea is the one about the clash between her son Zeus and her husband Cronus. Cronus took over the reign over the universe by castrating and defeating his father Uranus with the help from his mother Gaia, who did not want her children to be imprisoned by Uranus anymore.  Some time after Cronus’ reign started, Uranus told his son that he would have the same destiny and be defeated by his own son. Fearing that Uranus’ prophecy might one day become real, Cronus swallowed all his children the moment they were born but Rhea was not happy with this. She made a plan with Uranus and Gaia to save the child that she would give birth to. Gaia gave Rhea a stone (which is known in mythology as the Omphalos Stone) to fool Cronus into thinking that it was Rhea’s newborn baby. Rhea gave the stone wrapped in clothes to Cronus and Cronus swallowed it thinking it was baby Zeus.

The Rebirth of Dionysus

Rhea is also known in the mythology as the goddess who brought Dionysus  back to life.  It is told in the myths that Rhea sewed Dionysus back into one piece after the Titans sent by Hera tore  Dionysus apart.

Rhea was firstly associated by the Romans with Ops, the goddess of plenty, who was the wife of Saturn (the counterpart of Cronus in Roman mythology). However, as the time progressed Romans started to identify her with Magna Mater (meaning the Great Mother) which was a form of Cybele, the Anatolian Goddess of Earth, for them. This is the reason why the artworks of the time depicting Rhea and Cybele was almost identical.

The moon is one of Rhea’s symbols in the Greek mythology while other symbols include two lions (or lionesses) and the swan, a bird representing peace and  kindness.  She is depicted in some artworks while holding a stone wrapped in clothes before Cronus as a reference to the trick she played on him to save her son, Zeus. Some other artworks display her riding a chariot pulled by a pair of lions.