Who was Rollo the Viking in real life ? Was Rollo actually Ragnar Lothbrok’s brother ? Did he really become a duke of France? Here are the answers to all these questions as accurate as they could be given considering the scarcity of written records regarding those times.

First and foremost, it will make things a lot easier to state at this point that Rollo in Vikings by History Channel is a character very loosely based on the real Rollo, that is, Duke Rollo of Normandy.

The producer, Michael Hirst and the team behind Vikings already told many times during different interviews that Vikings is based on Viking sagas and records regarding the adventures of Northmen (which were mostly oral records) but historical accuracy was not  the main focus of the TV show.

Rollo was one of the most important Vikings in the history and that is probably the reason why the producer wanted to add the character to the mix. That being said, there are a lot of discrepancies with history and we will start with that.

Ragnar Lothbrok (<< click to read about him) was a legendary Viking hero who raided England and France many times and the father of some very important names in the history of Vikings such as Björn Ironside, Ivar the Boneless, Ubbe, Hvitserk and Sigurd Snake-in-the-Eye.

Ragnar Lothbrok’s raids on England and France and the deeds of his sons, particularly Björn Ironside and Ivar the Boneless (click to read about his life and death), had significant effects on the structure of these lands. However, there are a lot of theories about the identity of the real Ragnar Lothbrok.

Considering the accounts telling us of Ragnar are mostly oral records and sagas, it is not possible to know exactly who Ragnar was. Some experts suggest that these sagas are merely compilations of stories regarding different Viking heroes (different heroes given the name Ragnar or similar names according to some.)

Nevertheless, there is one thing we can be sure of;  Rollo was not Ragnar Lothbrok’s brother. Firstly, there is a huge gap between the times Ragnar and Rollo lived in.

Ragnar Lodbrok Sigurdsson is assumed to be born between 740 and 780.  Although there is no exact information about any of these dates, he is assumed to have died in Northumbria in 840.

Rollo, on the other hand, is known to be born in 860 while his death is assumed to have happened between 928 and 933.

In addition to that, there are absolutely no historical records or accounts suggesting a relation between Rollo and Ragnar Lothbrok. Some historians already argued that the large-scale attacks on Paris depicted in the TV series happened a long while after Ragnar Lothbrok died.

In the show, these attacks are the reason Rollo gets involved with the French court and becomes a member of it. That part is actually historically accurate. But, according to the accounts of the time, it was not Ragnar Lothbrok but Rollo and some other Viking chieftains who made the attack on Paris resulting in him being baptized and becoming the Duke of Normandy (more on that later in the article).

In conclusion, Rollo’s jealousy of Ragnar Lothbrok over many things (including Shieldmaiden Lagertha – read about Lagertha here) and the sibling rivalry between the two are purely fictional as they were not related.

But might the real-life Rollo have met other characters on the show, Floki maybe? As I specified in the article regarding Hrafna-Flóki Vilgerðarson, the real Floki here, Floki is assumed to be born around the year 830 which makes him about 30 years old when Rollo the Walker first started walking this earth. Therefore, although a meeting between these two “might” have happened, it probably did not considering nothing in the limited resources links these two historical figures to each other.

As another thing maybe we should clarify here, even if he was Ragnar Lothbrok’s brother, it would simply be wrong to call him “Rollo Lothbrok”. Lothbrok ( meaning “hairy breeches” )  was an epithet given to Ragnar because of the hairy breeches (or dirty breeches according to some accounts) he wore fighting a poison-breathing serpent. Therefore, Rollo Lothbrok would not be an accurate use. 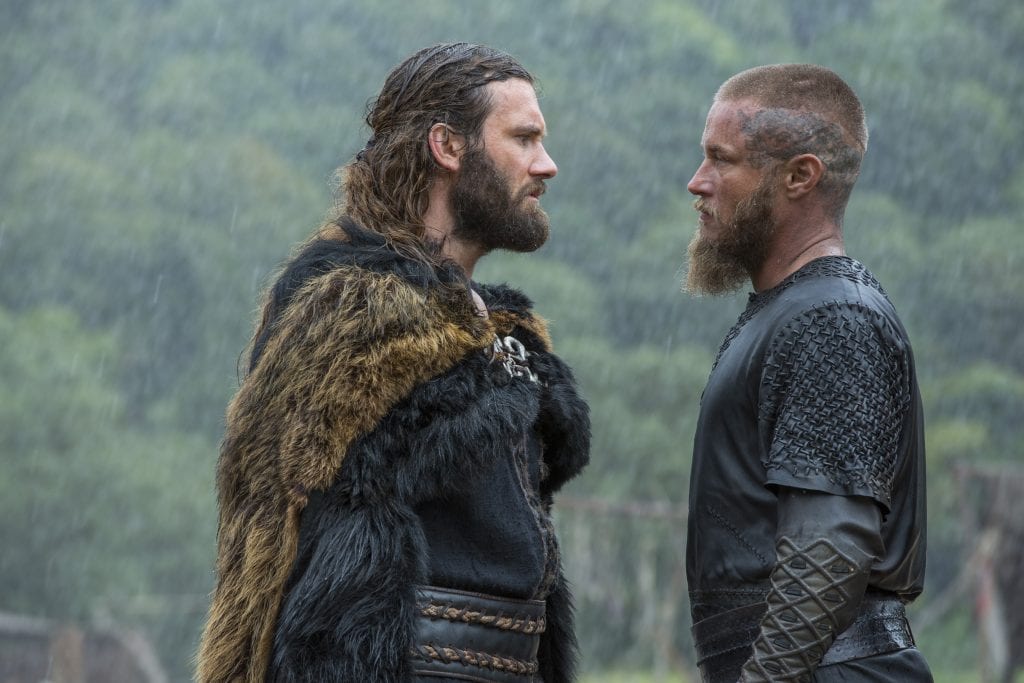 Rollo the Walker – Origin of the Name “Rollo”

The name “Rollo” is assumed to be the latinized version of “Hrólfr”. According to the legend, Hrólfr the Walker was a very large Viking who had to walk since no horse could carry him. In his work, Gesta Danorum (“Deeds of the Danes”), the 12th century author Saxo Grammaticus suggests that Hrólfr the Walker is actually Roluo.

Denmark or Norway – Where Was Rollo From ?

There are several theories regarding the birthplace and origin of Duke Rollo of Normandy.

According to Historia Normannorum (also known as Libri III de moribus et actis primorum Normanniae ducum),  a biogprahy on Rollo written by Dudo of Saint-Quentin, Rollo was the son of a Danish nobleman and had a brother named Gurim. After the death of his father, his brother was killed and Rollo was forced out of Denmark.

Dudo probably had the chance to work with family members and other people who actually met Rollo as his work was commissioned by Rollo’s grandson Richard I of Normandy. This, however, might be a reason to not consider Historia Normannorum an official biography as it might be a biased narrative.

Goffredo Malaterra (Geoffrey/Gaufredo Malaterra), an eleventh-century Benediction monk and historian, stated that Rollo was from Norway and came to the coasts of Christian lands with his Norwegian army. This was later supported by William of Malmesbury, an English historian who lived in 12th century.

In addition to that, a Welsh author suggests in The Life of Gruffudd ap Cynan that Rollo the Viking was actually the brother of Harald Fairhair/Harald Finehair, King of Norway (another character loosely based on a real-life character in History Channel’s Vikings).

Icelandic sagas Heimskringla and Orkneyinga identifies Rollo with Hrolf the Walker. According to these sagas, Hrolf was born in More, a western region of Norway in the 9th century as the son of Rognvald Eysteinsson (“Rognvald the Wise”) the Jarl/Earl of More  and Hildr Hrólfsdóttir a noblewoman. This information might also be biased as these claims were made by Rollo’s descendants three centuries after he died.

Rollo’s Raids on France and Becoming Duke Rollo of Normandy

The siege of Paris during 885 and 886 was the first time Rollo’s name appeared in the history as a Viking leader.

According to Dudo, Rollo seized Rouen in 876. Another chronicler, Flodoard supported Dudo’s findings later on adding that Robert of the Breton March fought Rollo but had to give away some coastal parts of the region to him and his Viking brethren.

Seeing the progress Rollo and the Vikings made, Charles III (Charles the Simple), the King of West Francia wanted to make peace with them. Charles III offered to formally recognize Rollo’s possession of these lands on the condition that he becomes a Christian and helps defending the kingdom against other Viking forces. The parties signed an agreement called Treaty of Saint-Clair-sur-Epte in 911.

After being baptized and taking the Christian name “Robert”, Rollo divided the lands between Epte and Risle rivers among his fellow brethren while he settled in Rouen.

According to Flodoard’s account, when Charles III was overthrown because of a revolt, Robert of Neustria, his successor wanted to fight Vikings. Both Robert and his successor Ralph were defeated by the Vikings. As a result of this, Ralph had to concede Maine and the Bessin areas to Rollo and his men.

The lands of the Northmen expanded even more with a third grant when Cotentin and Avranchin was given to William Longsword, Rollo’s son in 933 which is assumed to be the year of Rollo’s death. 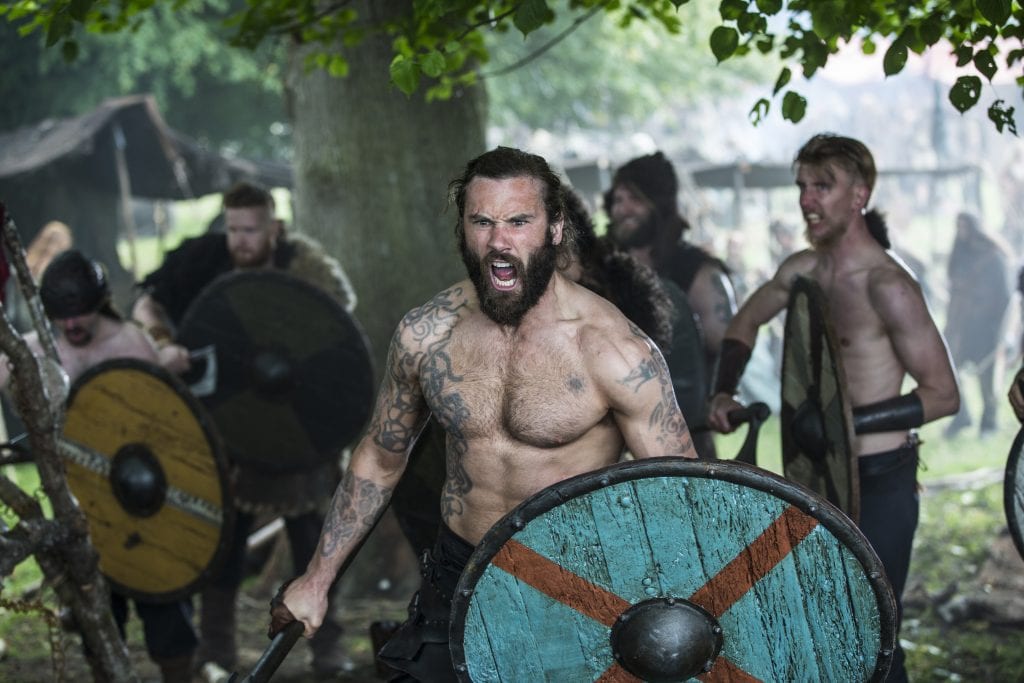 Rollo and Poppa of Bayeux

After he captured Bayeux, Rollo took Poppa (Popa), the daughter of  Berenger, Count of Rennes. He married Poppa and had a son from her named William Longsword who became his successor.

According to William of Jumièges, Rollo and Poppa also had a daughter named   Gerloc (Adele) who married  William II, Duke of Aquitaine later.

Rollo married Princess Gisla, the daughter of Charles III, the King of West Francia to seal the Treaty of Saint-Clair-sur-Epte which also made him the Duke of Normandy. However, there are speculations regarding the existence of Gisla and/or her legitimacy as  King Charles’ daughter.

Historians suggest that she might have been an illegitimate child of Charles the Simple since she would have been a 5-year old child when she married Rollo considering King Charles married in 907 for the first time.

An Banshenchas, a medieval Irish account and some Icelandic sources suggest that Rollo had a marriage in Scotland and had a daughter named Kathleen (Kaðlín/ Cadlina). Later, Kathleen married King of South Brega,  Beollán mac Ciarmaic.

William Longsword  (Vilhjálmr Langaspjót in Old Norse and Guillaume Longue-Épée in French)  succeeded Rollo and acted as the Duke of Normandy until he was assassinated in 942 by the followers of one of his enemies, Arnulf I, Count of Flanders. His son, Richard (who later became Richard I of Normandy/Richard the Fearless) succeeded him as the Duke of Normandy at a very young age when he was just a 10-year old boy.

Rollo’s Descendants and William the Conqueror

Rollo’s son William Longsword and his grandson Richard the Fearless made the Duchy of Normandy even stronger. Assimilated with the French culture, the Northmen made this region their home and this part of France became “Normandy”.

The descendants of Rollo also conquered England, Italy (Sicily in particular) and even lands as far as Middle East, namely the Principality of Antioch (a region within the lands of modern day Turkey and Syria).

As another important note here, Rollo the Viking is also the great-great-great-grandfather of William I of England who later became William the Conqueror. Therefore, Rollo is one of the ancestors of the present day British royal family and several other European monarchs through his descendants.

As an interesting side note for the fans of the Last Kingdom, another fictional TV series  about Vikings, Dudo also suggests that Rollo became friends  with a king in England named Alstem. The real identity of this king was a mystery for some time until it was understood that Alstem was actually Guthrum, the Viking warlord who was baptized by Alfred the Great and recognized as king of the East Angles as shown in the Last Kingdom.