Ragnar Lothbrok was a Danish Viking warlord and a renowned hero of Norse history who lived in the 9th century. The legendary Viking, who was also the king of Denmark and Sweden, was also known as Ragnar Sigurdsson as he was told to be Danish King Sigurd Ring’s son (or Hring) in some accounts.

Both the name Ragnar and the nickname “Lothbrok”, which must not be confused with a surname,  had many variations in the accounts of the age. Sometimes his name could be written as Regnar or Regner whereas his nickname/epithet could be written as Lodbrok or Lodbrog.

Ragnar’s epithet Lothbrok could be interpreted as “hairy breeches” in the Old Norse language. It could also mean “dirty breeches” according to some.

The epithet is believed to be derived from the breeches he wore while fighting a poison-breathing serpent (or a dragon according to some accounts) in one of the sagas featuring Ragnar Lothbrok.

Is Ragnar Lothbrok Real or Just a Myth ?

Yes, he is real. That being said, who Ragnar really was is a matter of debate among historians. At this point, the better question would be “How close is History Channel’s Ragnar to the actual historical figure ?”

Although he is known as the father of the most famous Viking heroes like Ivar the Boneless and Bjorn Ironside (who eventually became even more successful and famous than their father), there is more than one theory about the real identity of Ragnar Lothbrok.

Some historians suggest that the stories telling us about the legendary deeds of Ragnar Lodbrok/Ragnar Lothbrok are actually  a compilation of the accounts regarding several different Viking historical figures and there may be more than one Viking warlord that might have inspired the sagas. 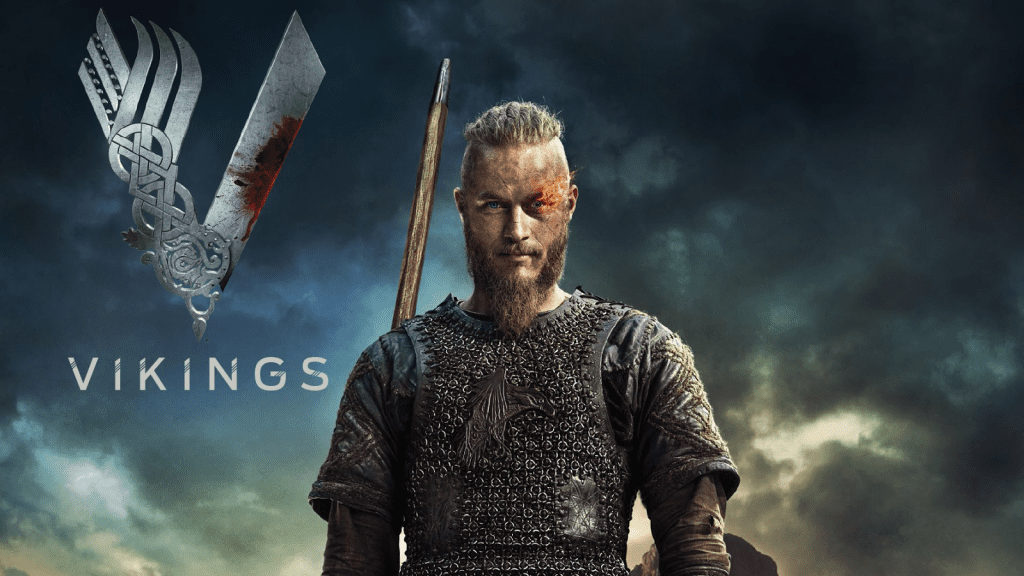 Stories in medieval literature regarding Ragnar Lothbrok differ in terms of details, however, the part about his raids on France and England is almost identical in every account.

In addition to that, a chronological account of the age which is considered a highly reliable source,  Anglo-Saxon Chronicle comprehensively describes Ragnar Lothbrok’s deeds that made a significant impact on the history of the 9th century.

The records regarding Vikings in Anglo-Saxon Chronicle does not end with Ragnar Lothbrok. It features somes tales about his sons and how they carried on his legacy.

According to the accounts of French historians, Ragnar ruled as a king in Denmark and he and his sons raided France ruthlessly.

Another account links Ragnar to Reginheri (Reginherus), the Viking who attacked Paris, hanged 111 Christians and died of a disease shortly thereafter.

Ragnar Lodbrok became famous as a warlord and made his fortune by raiding lands and kingdoms in the west. He allegedly attacked people while they were praying in churches.

Ragnar was known as a witty leader and sometimes used blitzkrieg (sudden charge) tactics to surprise well-organized and disciplined forces of his enemies, especially during his attacks on France.

As the main target of his raids, France suffered badly in the hands of Ragnar Lodbrok and his Northmen. It is told that Ragnar and his men captured Paris and made King Charles pay 7000 pounds as ransom on one occasion.

Ragnar  Lothbrok had three wives; Lagertha the Shieldmaiden,  Aslaug  the warrior queen and Thora Town-hart (Borgarhjort), a noblewoman who was the daughter of Earl Herrauðr of Götaland. It should also be noted that some accounts mention a fourth wife.

Ragnar had two daughters from Lagertha the Shieldmaiden and several daughters from his other wives but there is no accurate information regarding their names. Only two names, Ragnhild Ragnarsdottir and Åløf Ragnarsdóttir appear in some accounts as the possible names of his daughters.

Although there are not that many resources detailing who Lagertha really was, there is one that can shed some light into the life of the shieldmaiden: Gesta Danorum (“Deeds of the Danes”).

In Gesta Danorum, it is told that Ragnar met Lagertha when he was taking back Norway from Frø, the King of Sweden who killed Ragnar’s grandfather, King Siward of Norway during the invasion.

Along with the women in King Siward’s family and others living in his court, Lagertha was taken prisoner and put in a brothel to be humiliated.

These women fought bravely when Ragnar Lodbrok came to rescue them and take back his grandfather’s lands. That is where Ragnar met Lagertha. Lagertha is mentioned in Gesta Danorum as “a woman with the courage of a man who fought fearlessly”.

According to the story, Ragnar was so impressed by Lagertha’s bravery and he wanted to marry her. But it was not that easy. Ragnar killed a bear and the hound guarding Lagertha’s house to be convinced for marriage.

As an interesting side note here, unlike how it was depicted in History Channel’s Vikings, Björn Ironside is not featured as Lagertha and Ragnar’s son in most of the historical accounts. He was Ragnar and Aslaug’s second son after Ivar the Boneless. Yes, Ivar is told to be the oldest one.

Lagertha and Ragnar had a son but he was named Fridleif.

History Channel’s depiction of Aslaug, who was also known as Kraka and Randalin, is more accurate compared to some other characters in the TV series.

According to Saga of the Völsungs,  Aslaug, the third wife of Ragnar Lodbrok, was the daughter of the legendary Norse hero Sigurd and the shieldmaiden Brynhildr.

When her parents died, her mother’s foster father, Heimer thought it would be dangerous if anybody knew who Aslaug actually was.

He made a big harp and carried Aslaug inside it as he wandered around posing as a harpist. That went on until one day Ragnar Lothbrok’s men discovered her as she was bathing.

Mesmerized by Aslaug’s beauty, Ragnar’s men forgot about the bread they were baking and they had to tell Ragnar about her when Ragnar asked what happened.

Ragnar sent his men to bring Aslaug to him. Wanting to see if she was not only beautiful but also smart, Ragnar put her through some kind of a test.

Aslaug managed to impress him and Ragnar asked for her hand in marriage. At this point Ragnar had no idea that she was the daughter of two legendary Viking heroes.

When Ragnar visited Eysteinn Beli, a viceroy of Sweden, Eysteinn convinced him to marry his daughter Ingeborg instead of Aslaug. However, birds have already informed Aslaug (who was told to have “powers”) about Ragnar’s change of heart and that is why she had to tell him the truth about her real identity.

Aslaug told Ragnar Lothbrok that she was the daughter of the shieldmaiden Brynhildr and the legendary Viking Sigurd who killed Fafnir the dragon (or serpent)  according to the myth.

She told Ragnar that she would give him a child with a dragon/serpent in his eye to convince him of her lineage. She succeeded as that came true when she eventually gave birth to Sigurd Snake-in-the-Eye who was born with the ouroboros mark in his left eye.

According to the legend, Aslaug also tried to warn Ragnar Lothbrok when he decided to set sail for England unknowingly for the last time. That was kind of depicted in History Channel’s Vikings as Aslaug saw visions of Ragnar and Ivar falling into the sea.

On another interesting side note, Aslaug, who was known as some kind of sorceress, supposedly enchanted Ragnar’s armor and that is why the snakes in King Aella’s pit could not kill Ragnar Lothbrok until his men removed Ragnar’s armor.

Accounts regarding these times are comprised mostly of sagas and oral stories. Therefore, it is not that possible to know the exact birthdates of the real-life figures that inspired the characters in History Channel’s Vikings.

That being said, Ragnar Lothbrok’s assumed year of death is known as 840 and that is 20 years before Viking chieftain known as Rollo was even born.

Rollo and Ragnar Lothbrok were not brothers and these two historical figures lived in different times.

On an interesting side note, some historians argue that it was Rollo and some other Viking chieftains who raided and captured Paris. You can read our detailed article about Rollo here: Rollo, The Viking Duke of Normandy

The character named Floki in History Channel’s Vikings is loosely based on a real-life historical figure named  Hrafna-Flóki Vilgerðarson. But was he really Ragnar Lothbrok’s best friend ? That he was not.

The birth year of Floki is written as 830 in the accounts and that is only 10 years before Ragnar Lothbrok died as an old man. So, it is safe to say Ragnar Lothbrok and Floki of the Ravens (“hrafna” means “raven”) probably never even met and were not as close as depicted in the series.

There are two different stories telling us about Ragnar Lothbrok’s death. The first one identifies him with Reginheri and suggests that he died of a deadly disease similar to diarrhea right after he ravaged Paris.

The description regarding the disease in question and the manner of his death given in several accounts point to dysentery as his cause of death.

The second story, as it is told in some historical accounts, particularly the Anglo-Saxon Chronicle, tells us that Ragnar Lothbrok meets death in the hands of his enemies.

According to this version, on his way back home after he was forced out of  Paris, Ragnar’s ship washed ashore on the coast of the Kingdom of Northumbria where he previously attacked and held to ransom numerous times.

Longing for getting revenge on Ragnar Lodbrok for a long time, King Aella of Northumbria captured and threw Ragnar into a pit of snakes, leaving him to a painful and gruesome death.

Legend has it that, right before he died, Ragnar Lothbrok sang a Norse hymn and told King Aella that his sons would avenge him.

In some versions of this story, Ragnar said “How the little piggies will grunt when they hear how the old boar suffered” right before he died (SPOILER – That is something History Channel included to the show as the fans who have watched season 4 already know).

King Aella sent envoys to let Ragnar Lothbrok’s sons that he killed their father after which the sons made a vow to avenge their father.

The Great Heathen Army (The Great Viking Army, a combined army of Vikings from Denmark and Sweden) led by Ragnar Lothbrok’s sons invaded England and killed King Aella in 866.

Ragnar Lothbrok’s legacy continued and his descendants kept on making an impact on the structure of the region even long after he was gone. About two centuries after his death, descendants of Ragnar Lothbrok’s sons settled in the west coast of France turning this area into “the Land of Northmen”, Normandy as we know it in the present day. 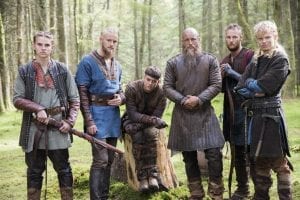 That being said, the historical figure depicted in History Channel’s Vikings should not be confused with the characters in BBC Two’s The Last Kingdom which is another TV series about Vikings adapted from the historical fiction works of Bernard Cornwell. Both Young Ragnar and his father, Ragnar the Fearless are unrelated to Ragnar Lothbrok.

Fans of The Last Kingdom must have already noticed that only Ivar the Boneless and Ubba/Ubbe are called as “Lothbrokson” in The Last Kingdom. Partly based on real-life events, that story  takes place during the time of Ragnar Lodbrok’s sons and The Great Army’s invasion of England.

If you would like to read more about Ragnar Lothbrok, The Sagas of Ragnar Lodbrok translated by Ben Waggoner includes three different texts telling the story of the legendary Dane (The Saga of Ragnar Lodbrok, The Tale of Ragnar’s Sons and the Sögubrot, an Icelandic text regarding Danish and Swedish kings) along with extensive commentary and notes to complement them.